All major sectors of the Cyprus economy expanded in the last quarter of 2015, according to new data released by the Statistical Service.

Although all sectors recorded growth, the relatively small and forgotten sectors of constructions and agriculture recorded the largest rate of expansion.

The constructions sector grew by a rate of 8.2% and agriculture by 7%.

Overall, the GDP at constant prices reached €3819 mn in the fourth quarter of 2015 as it expanded by €99 mn compared to the corresponding quarter of 2014. 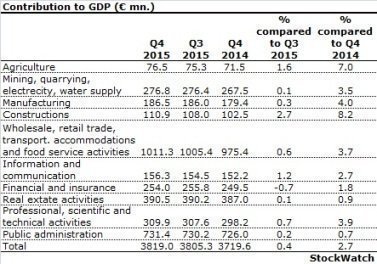 On an annual basis, the economy grew by 2.7%, while the growth rate reached 0.4% on a quarterly basis.

Data show that the sector of wholesale and retail trade recorded growth of 3.7% on an annual basis and 0.6% on a quarterly basis.

The sector contributed €1011,3 mn to the economy from €975,4 mn in the fourth quarter of 2014, recording an increase of €36 mn in a year. Note that this sector includes hotels and restaurants.

The sector of professional activities contributed €309,9 mn from €298,2 mn in the corresponding quarter of 2014.