07/01/2016 06:26
The Cyprus stock exchange was again among the worst performers of last year as it continued to perform poorly for the sixth consecutive year.

CSE's 21% decline during 2015 ranks it among the poorest performers not only compared to other stock exchanges but also among various asset classes tracking closely the fall in natural gas prices.

It is widely believed that the performance of the stock exchange in fact reflects the prospects of the overall economy and the country in general. 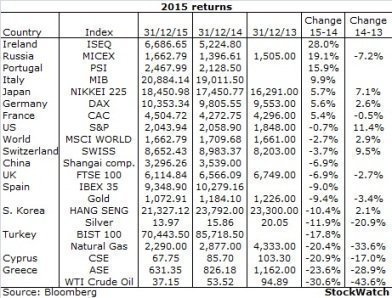 If this is true, the investing community clearly does not give a vote of confidence to Cyprus, contrary to the prevailing picture of a gradual stabilization and even light improvement of the state of the economy.

Given the economy's recovery up to the third quarter of 2015 it is estimated that Cyprus will show growth for the entire year, the first since 2011 something that prompted all credit agencies to upgrade the country during the second part of last year.

But, these developments failed to re-ignite investors interest even after the resumption of trading of the shares of the bank of Cyprus, the country's largest corporation.

In the summer of 2014 a major rights issue was concluded with major investors including the billionaire W. Ross purchasing the shares at €0,24. Both Mr Ross' hedge fund and Third Point which invested in the Hellenic bank, are losing a large portion of their initial investments.

The poor performance is evident compared to all geographical areas globally, and within Europe among other peripheral countries which despite going through their own economic adjustment programs not long ago, managed to have much better, even highly positive, returns.

Only the performance of the Athens stock exchange came close to the CSE's but Greece faces much bigger challenges than Cyprus.

It remains to be seen if this is a case of investors just underestimating the country's and the corporations' prospects or if they are wise enough to recognise potential future weaknesses that will prove to be challenging and difficult to tackle.
Next