04/01/2016 12:56
Deposits in the banking system have decreased in November, the first decrease since June after four consecutive months of increases.

According to the latest data published by the Central Bank, deposits in November decreased by €68 mn after an increase of €288 mn the previous month. 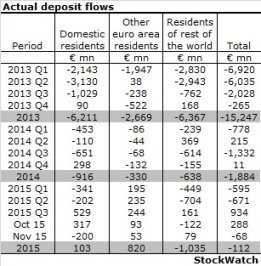 The decrease follows a total increase of €1,22 bn in the previous four months which almost covered the entire decline of the first half of the year.

The decrease is due to deposit outflows from domestic residents as they withdrew a net of €200 mn in November after €846 mn in net inflows in the previous four months.
This was contrary to the trend that prevailed during the previous quarters when residents were withdrawing their deposits. The overall 2015 net contribution by domestic residents is €103 mn.

Euro area residents continued their positive contribution to the deposit base as they accounted for €53 mn of net deposit inflows in November.

Euro area residents have consistently brought funds into the Cyprus banking system as this is the twelfth consecutive month of net deposit inflows. Their net contribution for 2015 amounts to €820 mn. 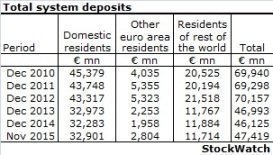 Residents of third countries increased their local deposits by €79 mn in November. Their net deposit inflows for the whole year amount to -€1.035 mn.

The overall net deposit inflows during the first eleven months of 2015 reached €112 mn.

The figures show the actual changes in deposit levels in contrast to the total deposit figures announced each month by the CB and shown in the second table, which are calculated after the prevailing foreign exchange rates are taken into account.

Due to this, the December net deposit inflows are shown to be €340 mn while for the first eleven months €1294mn.

Since April all restrictions on capital movements have been abolished.
Previous Article
Next Article