14/12/2015 09:02
The tens of thousands of euros that Hellenic bank is offering to its employees in order to lure them to accept early retirement do not seem to convince them so far.

Just a few days before the expiration of the deadline of the latest early retirement plan by HB, employee interest is rather limited.

The lump sum amount an employee is entitled to upon acceptance of the scheme varies according to his/her gross monthly salary and months of service at the bank. 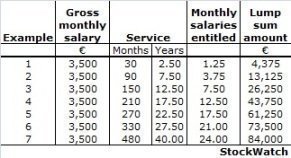 The second variable defines the exact number of gross monthly salaries each member of the staff will be compensated.

One extra monthly salary is given for every two years of extra service up to a total of ten years.

After that and up to 25 years of service, one extra monthly salary is offered for each additional year of service.

For those with more service and up to a total of 30 years, an extra 2,5 years are needed for one additional monthly salary while beyond that the monthly salaries to be offered remain fixed at 24.

The examples given in the table show how the compensation varies with the duration of service for a certain monthly salary while for different salaries the amounts are proportional.

The plan is designed to give an incentive to highly paid employees with much experience to accept it as they are the ones to be compensated sufficiently. Of course it all depends on the employee's specific circumstances.

The lump sum amount is not to exceed 80% of the total gross salaries the employee would be paid from now till he/she retires.

As an extra incentive the lump sum amounts will be tax-free.

An employee who accepts the plan is also entitled to his/her provident fund which due to its short life, as in 2013 the then existing provident fund was dissolved and then a new one was established, is of low value at this point in time.

The plan started on November 20 and runs through December 18.
Previous Article
Next Article