Banks' reliability on the mend

The new StockWatch reliability survey with a sample of 600 households shows a marginal improvement in levels of confidence in the banking system.

According to the survey, most banks’ reliability score improved, including subsidiaries of Greek banks, which in the previous survey posted a significant decline amid an unstable situation in Greece.

Consumers were asked whether ten specific banking institutions are reliable and if they would recommend them. The answers were given on a scale of 0 to 10. 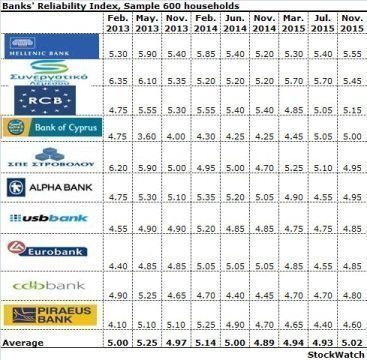 The survey was conducted amid the recent process of recapitalization of the Greek banks, with a positive impact on the reliability of the subsidiaries of Greek banks in Cyprus.

The reliability of the Bank of Cyprus stood at 5.00 from 5.05 in July 2015. In the reliability question the bank received 5.2 and in the recommendation question it scored 4.8.

The two cooperative institutions included in the survey received different scores even though, technically, they are under the umbrella of the Central Cooperative Bank.

Despite the decrease, Limassol COOP still enjoys a relatively high level of confidence.

RCB is in the third place receiving 5.15 versus 5.05 in the previous survey, showing an improvement in 2015.

The survey was nationwide in urban and rural areas with men and women of 18 years and older. The methodology was multistage stratified random sampling. The survey was conducted between November 4 and November 11, 2015 by telephone interviews from the call center of RAI Consultants.
Previous Article
Next Article