Cyprus economy is repeatedly exceeding analysts' expectations, due to its resilience to exogenous shocks and the dynamism of the tourist industry.

The initial estimate for the third quarter growth, points to a third successive quarter of expansion while the announced rate of 2,2% is higher than that of the previous two quarters pointing to an acceleration of the rate of growth.

This suggests that the most optimistic forecasts of GDP growth of 1,5% for 2015 are within striking distance. 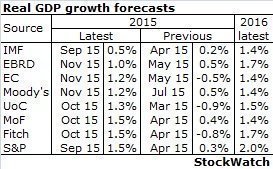 Moody's revised on Friday its 2015 real GDP growth forecast to 1,2% from 0,5% it predicted in July of this year becoming the last of the eight major organizations/bodies that have published their predictions for Cyprus.

All of them have revised their projections upwards as compared to their previous expectations as Cyprus' economy continued to react better than everybody expected at the beginning of the year.

Based on their predictions, the ministry of finance along with the other two major rating agencies, S&P and Fitch, are the most optimistic with the latter proceeding to the largest revision as it revised its previous forecast of a 0,8% contraction made seven months ago, to a 1,5% expansion made on October 23.

All of the organizations stress the economy's unexpected resilience throughout the year as it managed to withstand serious challenges stemming mainly from the political and economic crisis that ensued in Greece and also from the economic downturn in Russia.

Especially the tourism sector which was expected to be hard hit due to the developments in Russia, proves to be on a sound footing as despite the decline in Russian visitors, it enjoys spectacular increases from other key markets and most importantly from the UK.

Based on tourism arrivals since September, a strong performance in tourism receipts is expected for the rest of the year.

The most conservative estimate of 0,5% comes from the IMF but, its projections since Cyprus entered an economic adjustment program in 2013 have proved to be below real levels.

The organizations have revised upwards their 2016 forecasts as well although at a lower degree. They are all predicting a higher growth than in 2015.

If the government manages to stay on the path it followed so far and continues to implement the necessary reforms without being affected by the prospect of exiting the adjustment programme in March and the coming parliamentary elections of next May, fresh upward revisions for 2016 may be necessitated as well.
Previous Article
Next Article