26/10/2015 10:25
Brokerage offices in Cyprus expect that the Cyprus Stock Exchange will recover in the coming years, hoping for the introduction and listing of new companies and the attraction of primarily institutional investors to bring CSE out of its current state of lethargy.

Although the CSE turnover appears higher this year compared to the previous two years, it remains at much lower levels than those of the 1990s.

The low investment interest, corresponding to a daily turnover of € 0,6 mn is allocated to 16 brokerages.

Argus portfolio analysis manager Savvas Theophilu told StockWatch that since there is no interest from institutional investors low trading volume is something to be expected.

"Following the decisions of March 2013, it will take time to fully restore confidence and credibility in the stock market system" he adds.

Mega Equity analyst and broker Antonis Stavrou, said that the low volumes observed in the CSE is a big problem.

"Decisions of 2013 had a negative effect on the stock exchange" he said, adding that only listing new titles and attracting institutional and other investors will be able to boost the stock market.

As Mr. Stavrou notes, the fact that many brokerage offices turn to other markets besides Cyprus, has contributed to the reduction of volumes on the CSE.

Despite the current situation there are expectations for a gradual return of investment interest.

Mr. Stavrou said that the "CSE is expected to recover substantially over the next 1-2 years if there is an implementation of what was announced, such as the listing of the Bank of Cyprus title to a foreign stock exchange”.

"The bet for the next five years will be whether the CSE will be able to attract institutional investors by establishing some mutual funds which have already started to show interest for the country," Mr. Theophilu said. 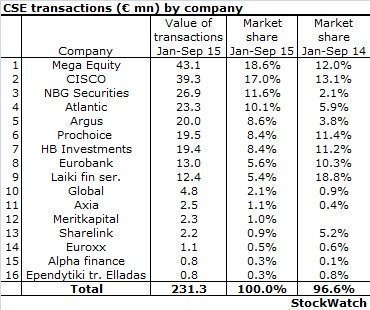 In the absence of investor interest, brokerage offices involved in CSE, are trying to survive in very difficult conditions. Many of them are linked to and financed by banks.

Among brokerage offices, Mega Equity holds the biggest market share (18,6% from 12% last year) with the total value of its transactions reaching €43.1 mn.

CISCO follows with an overall market share of 17% from 13.1% in January-September 2014 and the total value of transactions reaching €39.3 mn.