08/09/2015 13:23
Harmonized consumer price index fell by -1.9% in August, according to data released today by Cystat as prices declined for the ninth consecutive month. 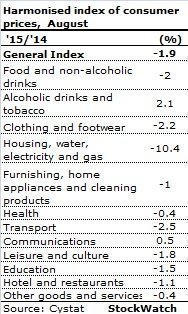 The decline in inflation in August was mainly due to the housing, water supply, electricity and gas sector.

A decline of 2% was observed in the sector of food and non-alcoholic drinks in August versus a fall of 5,1% observed in July.

A significant reduction was recorded in prices in the sector of transport and the sector of clothing and footwear which fell by 2.5% and 2.2% respectively.

On the other hand an increase of 2.1% was recorded in alcoholic drinks and tobacco sector compared with 1.9% in the previous month.

A fall was also recorded in prices in the leisure-culture sector (-1.8%), restaurants - hotels (-1.1%) and education (-1.5%). Prices in the sector of furnishings, household equipment and supplies declined by 1% against a decline of 0.6% in the previous month.

As regards the January – August HICP, the index fell by 1.6% compared to the same period of 2014.