Lending rates are on a downward trend since March 2015 in Cyprus supporting prospects for the recovery of the economy.

After the intervention of the Central Bank to reduce deposit rates on 16 February 2015, lending rates started to decline although they remain at the top among eurozone countries. 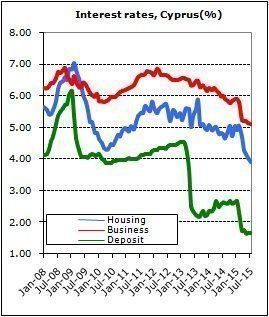 Since February 2015 business loan rates have decreased by 69 percentage points.

Despite the decrease, they are still the highest in the eurozone. 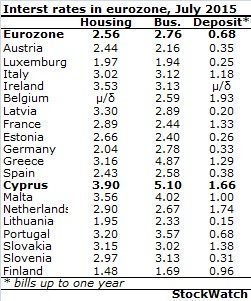 These are the highest rates among all euro area countries. Since February, however, a decrease of 115 percentage points has been recorded.

The decrease recorded since February amounts to 64 percentage points.

The lowest deposit rates are recorded in Lithuania (0.15%) and Latvia (0.20%).
Previous Article
Next Article