27/08/2015 15:55
Deposits in the banking system have increased in July for the first time this year highlighting the general improvement of the economic environment and the effects of developments in Greece. 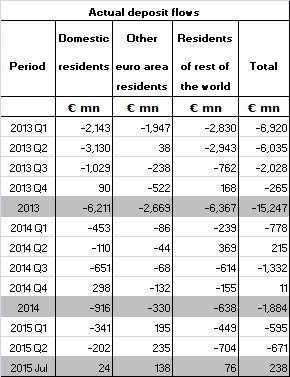 According to the latest data published by the Central Bank, deposits in July increased by €238 mn as opposed to a decline of €398 mn the previous month.

The June drop was actually the largest monthly change in 2015 and the sixth in a row, raising concerns about the future course of the deposit base.

Consequently, July's increase is a welcome development as it snaps the accelerating rate of decline even though its main driver may be the shift of funds from Greece to Cyprus.

The great majority of the increase is due to deposit inflows from Euro area residents as they accounted for €138 mn of net inflows. 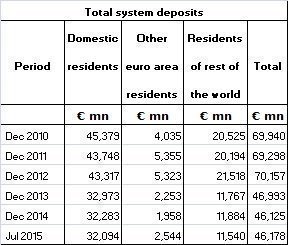 In fact Euro area residents have consistently brought funds into the Cyprus banking system as this is the eighth consecutive month of net deposit inflows.

Non-residents outside the Euro area contributed €76 mn after the substantial net outflows they had during the previous months.

Cypriot residents' contribution was limited to €24 mn as opposed to a net outflow of €229 mn in June.

The figures show the actual changes in deposit levels in contrast to the total deposit figures announced each month by the CB and shown in the second table, which are calculated after the prevailing foreign exchange rates are taken into account.

Due to this, the July net deposit inflows are shown to be €400 mn.

Since April all restrictions on capital movements have been abolished.
Next