25/08/2015 13:12
The retail trade volume index recorded the highest increase in five months in June 2015 remaining on positive ground for the sixth consecutive month.

According to Cystat data released today, the turnover volume index of retail trade is provisionally estimated to have recorded an annual increase of 3.9% in June compared to the corresponding month of 2014. 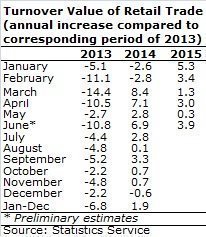 In May 2015, according to final figures, the index recorded an annual increase of 0.3%.

The sectors with the highest increase were computer equipment, books and other with a rise of 11.7% and retail sale of food, beverages and tobacco in specialized stores up by 8.3%.

A decline was recorded in the sector of other retail trade in non specialized stores which fell by 2.4%.

For the period January-June 2015, the index is provisionally estimated to have increased by 2.8% compared to the corresponding period of 2014.

As regards the retail trade value index, an annual decrease of 1% was recorded in June.

For the period of January-June 2015 the retail trade value index is estimated to have declined by 0.7% compared to the corresponding period last year.
Next