25/08/2015 13:03
Car registrations rose for the seventh consecutive month in July as interest for new vehicles increased.

According to figures released today by Cystat, total registrations of saloon vehicles increased by 12.1% as they reached 2.105 in July 2015 from 1.877 in July last year. 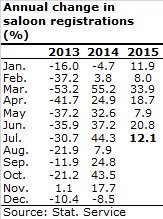 The increase recorded in the market of used vehicles stood at 4.4% in July reaching 1.014 against 971 in the corresponding month of 2014.

The official data of the Statistical Service refer to all passenger saloon cars including private, taxi, rental, learner and invalid cars.

In the first seven months of the year, total car registrations increased by 11.3% as they reached 15.078 compared to 13.543 in the corresponding period last year.
Previous Article
Next Article