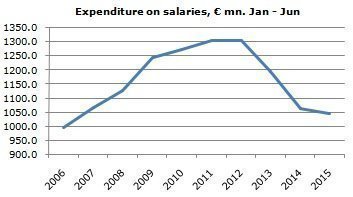 The Statistical Sevice’s figures include the salaries of civil servants, employer's contributions and employer's imputed contributions which show an upward trend in the past three years due to early retirements (lump sum).

While the state payroll begins to narrow down, the government is preparing for wage increases starting from 2017, for employees working in the public and semi-public sector, local government and hourly paid public employees.

According to the agreement signed between the government and the unions, from 2017, there will be wage increases equal to the nominal GDP growth.

These increases are expected to reach at least 3% to 4% compared with increases close to 7% received by workers in the public and semi-public sector in the pre-crisis era.

The ATA will be paid once instead of twice per year while increments are reduced from 2-3% to 1%.

The government expects that under normal circumstances and according to IMF projections for the next five years, the GDP growth rate will allow full payment of increments and ATA while the payment of general increases will also be allowed if such a demand is submitted and agreed.

The government also seeks the abolition of the special contribution of about 2% payable by employees of the public and private sector, before the end of 2016, which will depend on troika’s attitude.

The government’s planning for increases in the public sector, is based on the great improvement in the budget balance. According to new estimates, the budget deficit is expected to fall this year to levels below 1%, surpassing the revised projections of Cyprus’s creditors.
Next