29/12/2014 09:26
The economic climate indicator continues to show improvement of the economic situation in all sectors except construction. 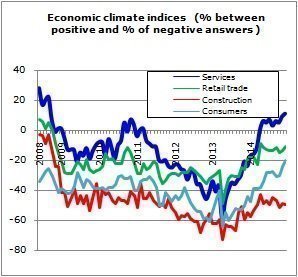 According to new data released by the Center of Economic Studies (CES) of the University of Cyprus, the economic climate improved by 2,1 units during December, with the indicator reaching 105,2 from 103,1 in November.

According to CES the indicator is maintained above its long-term average of 100 since May 2014 while the real economy is still in recession.

The continuing improvement of the indicator since mid 2013 reflects the fact that the recession is decelerating.

The improvement in December comes from better prospects in both the services and retail sectors as well as among the consumers. On the contrary the situation in the construction sector remains stagnant.

The increase in the services sector comes from the improvement in the current economic state of enterprises and expectations for higher turnover in the next three months.

Regarding the retail sector there seem s to be an improvement in current and expected sales in the near future.

As far as the consumers are concerned, they expect their household situation and the general situation of the economy to be improving in the next 12 months.

Nevertheless the number of consumers who intend to proceed to large purchases is marginally higher while most deem the probability of savings in the next 12 months as unlikely.
Next