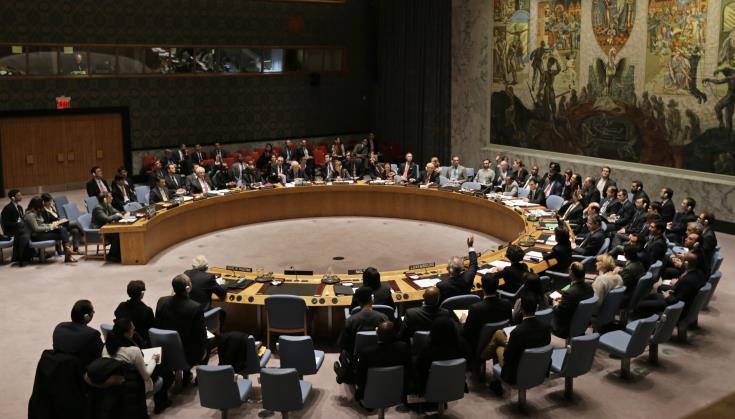 The UN Security Council unanimously adopted on Thursday the resolution for the renewal of the mandate of the UN Peacekeeping Force in Cyprus (UNFICYP). Resolution 2587 renews UNFICYP’s mandate for six more months until the 31st of January 2022.

The Ministry of  Foreign Affairs welcomed the unanimous adoption of the resolution noting that in the resolution the UN Security Council reaffirms its Presidential Statement of the  23rd of July 2021 regarding the Turkish illegal actions in Varosha and condemns the Turkish President`s and the Turkish  Cypriot leader`s statements on the 20th  of July 2021, calling for the immediate reversal of all illegal actions that have taken place since October 2020 while reaffirming the relevant resolutions, with special reference to resolutions 550 (1984) and 789 (1992).

The Foreign Ministry says that it is important that in relation to Varosha, the resolution reiterates the Security Council`s position that no action should be taken that is incompatible with the above-mentioned resolutions and calls for actions to be avoided that undermine the prospects for a peaceful solution.

In statements to the press after the adoption of the resolution, Ambassador Andreas Hadjichrysanthou, Permanent Representative of Cyprus to the United Nations, said that the government of Cyprus considers the presence of UNFICYP as irreplaceable as long as the status quo persists and one third of the country remains under occupation, a situation that poses a serious threat to peace and stability.

The Cypriot Permanent Representative, who, before the start of the UNSC meeting met with the President of the Council and gave the consent of the Government of the Republic of Cyprus, referred to the fenced off area of Varosha, saying that there, we witnessed a violation of the UNSC resolutions and added that the developments there show the challenges that UNFICYP is facing on the ground.

We welcome, he said, UNSC`s call to respect the freedom of movement of UNFICYP in Varosha, which will facilitate the monitoring of the ongoing serious situation there.

He noted that the resolution reaffirms the strong message of the Presidential Statement issued last week on the serious and dangerous fait accompli that the occupation force has created in the fenced off area of  Varosha on July 20th calling for their reversal.

In addition, he noted the importance of the UNSC reaffirming once more the form of the settlement we are seeking in the Cyprus peace process, which is bizonal, bicommunal federation with political equality, as outlined in the relevant UNSC resolutions.

We stand ready, he said, to resume negotiations on this basis and we remain convinced that the bizonal, bicommunal federation can address the concerns of all Cypriots in a reunited and independent Cyprus, without external intervention.