ECB President: Cyprus is a key player in EU and Eurozone 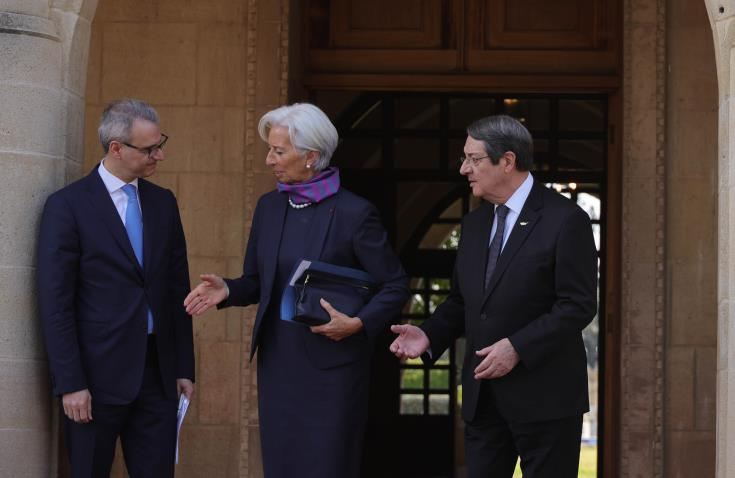 Cyprus is very much not at the far end of Europe, but at the core of Europe and a key player and a key member state in Europe and Eurozone, said European Central Bank’s President Christine Lagarde in statements, at the Presidential Palace, in Nicosia after meeting with the President of Cyprus, Nicos Anastasiades, in the presence of Central Bank Governor, Constantinos Herodotou.

At the same time, she expressed the belief that Cyprus will recover from the crisis caused by the war in Ukraine, praising the adaptability of the Cypriot economy during the banking crisis as well as during the pandemic crisis.

Lagarde, who is visiting Cyprus at the invitation of CBC Governor, had a meeting on Wednesday morning with Herodotou at the Central Bank and met after that with President Anastasiades at the Presidential Palace.

Speaking after the meeting, President Anastasiades said that it is a great pleasure to welcome to Cyprus the President of the European Central Bank, Christine Lagarde. “Your visit to our country, on the invitation of the Governor of the Central Bank of Cyprus, is of great importance, particularly in view of this important juncture for the European and also the global economy”, he said.

He added that during the meeting he had the opportunity to brief President Lagarde about the current state of the Cypriot economy and discuss with her some of the new challenges that arise, which, of course, also have consequences for the European Union and its member states, as well as the Eurozone.

Anastasiades noted that the significant progress of the Cypriot economy in recent years, which led to the creation of sufficient fiscal buffers, has enabled the country to protect livelihoods against health and economic fallout from the COVID-19 pandemic.

He went on to say that today we are all faced with the war in Ukraine and the unparalleled crises it creates. The Republic of Cyprus is up against new obstacles, such as reduced tourist arrivals, increased inflation, and rising energy and food prices, all of which undermine the country`s growth trajectory, he said.

He expressed his optimism that, once again “we will manage to exceed expectations and continue implementing our commitments towards macroeconomic and financial stability and sustainable and inclusive growth, to the benefit of our citizens and business. Our shared understanding with President Lagarde is that an EU comprehensive plan is once more necessary in order to tackle the uncertainties and enhance our resilience in the challenging period ahead.”

Finally, he told Lagarde that her visit to Cyprus demonstrates "our will to work closely together and further strengthen our productive cooperation."

Christine Lagarde, said that it is a great pleasure to be back to Cyprus, noting that today they had an exchange of views on the global economic situation but also on the drama which is taking place next door to Europe as a result of the terrible war of Russia in Ukraine. We discussed the economic consequences that it will have for our countries within Europe and specifically within the Euro area.

“We are all shocked and horrified by the images of the war and everybody is doing their best to address the situation”, she said noting that the ECB within the Euro system and the national Bank of Cyprus is part of the exercise. “We try to procure stability of prices, financial stability, but also we are attentive to what support could be extended and we are very keen that the sanctions which have been decided at the European level be also observed and implemented with total integrity and rigor and this is what needs to take place”, she said.

Lagarde noted that there are economic consequences to all this and clearly those countries that have developed an extensive service sector are affected. It has been the case in the past, she said, that "Cyprus has demonstrated its ability to change, to improve, to innovate and move from one business model to another and I very much hope that this is yet again the case because it is of course a fact that tourism activity in particular will be affected."

“I have full confidence that Cyprus with the help of its partners, with the help of Europe and other Euro area members will be able to recover and balance back and return to the prosperity and the path that it had taken previously, even during the COVID years that you have demonstrated incredible energy and ability to resist the shock”, she pointed out.

Lagarde said that it is a great pleasure to see that Cyprus is "very much not at the far end of Europe, but at the core of Europe" and a key player and a key member in Europe, and assured that as President of the European Central Bank, the voice of Cyprus is well listened to and very well respected at the table of the Governing council and Cyprus plays an important role in Europe and certainly from my perspective, a very important role in the financial circle.

Constantinos Herodotou, said that he expressed his gratitude for accepting the invitation and finding time to visit Cyprus. Europe, he said, including Cyprus has already entered a new challenging phase that calls for imminent action and action is been taken both at the ECB and here in Cyprus.

“In this challenging environment we need to further enhance our efforts towards a sustainable growth and finance model by taking all necessary measures. With Lagarde we are already working proactively at the ECB governing council and I am optimistic that once again we will face the sort term and long term challenges in the best and most proactive way”, he said.

Regarding the local banking system, the Governor said that despite the pandemic`s consequences and the new challenges, he reassured Lagarde that it is solid and can absorb any turmoil or spillover effects as it works its way out of NPLs and towards the new era of technology and automation with sufficient capital buffers and strong liquidity.