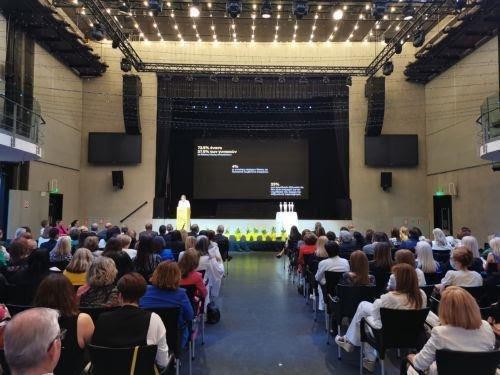 He was addressing the AGM of Cyprus Federation of Business and Professional Women which took place in Nicosia.

In an address, delivered on his behalf by Justice and Public Order Minister, Stephie Drakos, President Anastasiades expressed the conviction that women's drive allows them to successfully tackle multiple roles and tasks.

"The accomplishments and general successful activity of women in the private and public life have demanded respect, recognition and making the most of their capabilities," he noted, adding that this is why he has entrusted to a significant number of women important posts of responsibility, more than ever since the establishment of the Republic of Cyprus.

Today, he added, over 50% of Commissioners in Cyprus are women, while the participation of women in Boards of Directors of semi-governmental organisations has increased significantly to over 35%.

He also said that five accomplished women are part of his Cabinet, while a woman has for the first time been elected as President of the House of Representatives.

President Anastasiades noted, according to statistical data for 2019, that Cyprus is at 10.1% as regards the gender pay gap compared to an EU average of 14.1% .

This positive development, he said, means that Cyprus is ranked 7th between member states, having made significant progress in recent years, from 15.6% in 2012 when the present administration took over to 10.1%.

President Anastasiades outlined a series of measures, policies and legislation the government has put forward in support of gender equality.

Cyprus Chamber of Commerce and Industry President Christodoulos Angastiniotis said, among other things, that chamber has always believed that women entrepreneurship contributes greatly to growth, innovation and the creation of new jobs. He also expressed readiness to support any new initiative by the Cyprus Federation of Business and Professional Women.

Cyprus Employers and Industrialists Federation President Antonis Antoniou spoke of three challenges Cyprus and Europe have to meet to recognise women as equal business people which are those of equal treatment and recognition in the work place in general, promoting women to upper management and recognising them as capable of establishing and being successful in all sorts of start-ups or new enterprises.

Cyprus Federation of Business and Professional Women Chairwoman Mary Papadopoulou said that women have faced problems and challenges which today are ever changing, adding that the federation has undertaken the task of promoting an action plan, being well aware from the start that we will need to have a revolution for what is self-evident.