08/01/2014 06:02
The majority of the large insurance funds recorded positive returns in 2013 despite the adverse domestic conditions, but witnessed a major outflow of assets under management.

New data of the association of insurance companies show that, despite the positive investment performance, the value of the assets of the ten largest funds declined by 12.4% or €100,3 million.

This decrease is mainly due to the increased redemptions of insurance contracts and the transfer of money into lower risk funds.

According to the figures, the assets of the ten major insurance funds decreased to €711,8 million compared to €812,1 million last year.
Most investment funds recorded positive returns or in some cases, small losses.

The assets of the largest domestic insurance fund, the mixed fund of Eurolife, which is of medium risk, fell 11.5% to €291.1 million from €328.8 million last year. 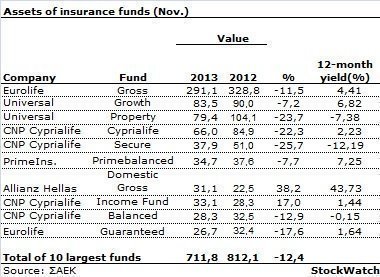 The assets of the property fund of Universal Life suffered losses of 23.7% in November 2013 compared to November 2012. Over the past 12 months it recorded a negative performance of 7.38%.

CNP Cyprialife, the fourth largest insurance fund, showed a decline in its value by 22.3% to €66 million from €84.9 million. For the full year, its permonance amounted to 2.23%.

Losses of 25.7% were registered in the value of the secure fund of CNP. The fund has a negative annual return of 12.19%.

Significant increase of 17% to €33,1 million was recorded by the income fund from €28,3 million last year. The yield of the fund over the past twelve months stood at 1.44%.
The gross domestic of Allianz Hellas increased by 38.2%.

Commenting on the figures, the investment director of CNP Chrysanthos Pantazis said the reduction in assets of the funds is the result of acquisitions and expirations.

Some funds, he said, do not accept contributions from new customers, while others are affected by outflows to other funds.

As for their yields, he said, the positive international climate favorably influenced some funds, particularly those with exposure to international equities.
Previous
Next 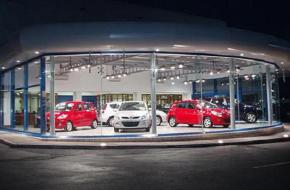 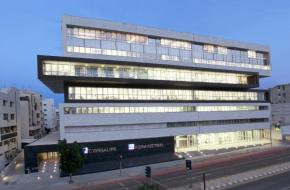 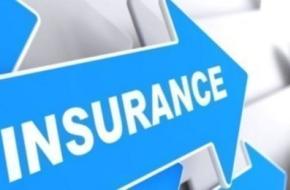