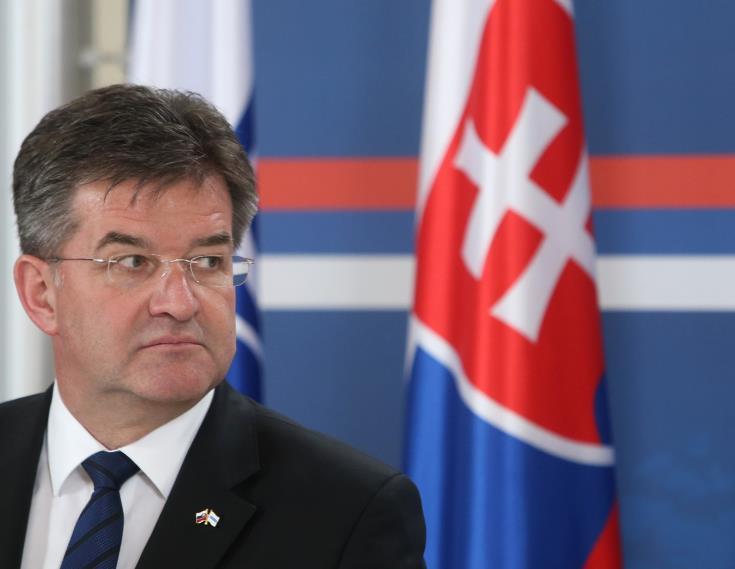 Slovakia’s position with regard to Turkish actions in the exclusive economic zone of Cyprus is in line with EU calls to Ankara to abort plans for offshore drilling operations, Slovak Foreign and European Minister Miroslav Lajčák says, while expressing hope that relations between the Republic of Cyprus and Turkey will normalize soon. This is a precondition to re-launching peace negotiations, the Minister remarks, before starting his contacts as part of his two-day visit to Cyprus, on the occasion of the 30thanniversary of the bi-communal meetings of the Greek Cypriot and Turkish Cypriot political parties under the auspices of Slovak diplomacy.

In an interview with CNA, Slovakia’s Foreign Minister also says that “there is no alternative to the bi-zonal bi-communal federation” and adds that a solution along those lines is “within reach.”

With regard to the UN peacekeeping mission in Cyprus, he says that Slovakia strongly supports further strengthening of UN peacekeeping operations and assures that his country will remain involved in UNFICYP “for as long as necessary.”

Lajčák also notes that the bi-communal dialogue is “almost the only communication channel between people” in divided Cyprus and assures that the Slovak Republic is ready to continue playing its role as an honest broker and an impartial mediator.

Asked how he evaluates developments in Cyprus, following Turkey’s intention to start offshore drilling in the country’s exclusive economic zone(EEZ), Lajčák responds that “Slovakia´s position is in full compliance with the declaration of the EU High Representative Federica Mogherini who has called on Turkey to abort plans for offshore drilling operations in Cyprus’ EEZ.” He notes moreover that Mogherini`s statement has formulated a framework position for all EU member states on the fundamental issue of the EU foreign and security policy. “Slovak diplomacy, as an impartial mediator of dialogue between Greek Cypriot and Turkish Cypriot political parties, hopes that relations between the Republic of Cyprus and Turkey will normalize soon as this is a precondition to re-launching peace negotiations” the Foreign Minister of Slovakia underlines.

Asked about the benefits of a solution, the Minister says that “a Cyprus settlement would be not only a victory of international law, or justice” but first and foremost “a victory of humanity, with huge benefits for the people.” He points to the benefits for ordinary people, saying they will be able to travel freely, decide where they want to live, where to make their business, while feeling safe and protected as part of the greater European Union family. Lajčák also says that a solution would be also a significant contribution to regional safety and stability, and an impetus for further economic growth in the wider region, with emphasis on energy security.

Slovakia’s Foreign Minister, who is also the OSCE Chairperson-in-Office, says that “finding a political solution to the longstanding situation in Cyprus would be the best way to ensure security.”

He remarks that the EU provides a framework for enhanced security through various instruments, “but the primary responsibility for security remains with every member state.”

“Despite the failure of recent negotiations, the current peace on the island is a result of long-term efforts. It is a consensus between the two communities, the UN, the European Union and other international actors. We have to protect this fragile peace on the island. Therefore, a synergic effect of multilateral organizations as the UN, ICRC and OSCE is needed in Cyprus” Lajčák says. This is also the reason why the Slovak OSCE Chairmanship has chosen effective multilateralism as one of three main political priorities during its mandate, he remarks.

As for his message to Cypriots, the Foreign Minister says “there is no alternative to the bi-zonal bi-communal federation ”with Cyprus being a part of the greater European Union family. “This project is a result of long-lasting negotiations among all key stakeholders. We believe that the solution based on the UN Security Council resolutions and convergencies achieved by both leaders in negotiations is within reach. What is still missing is a courage and political will to bear responsibility for its implementation” he adds. According to Lajčák, Slovak diplomacy is patient and ready to maintain its role as an impartial facilitator for as long as Cypriots find this useful and necessary.

Moreover, he talks about the need to maintain ownership of the peace process among Cypriots and make decisions about the future, without external interferences. “It is necessary to invest in a new generation by raising and educating young people to humanity, respect, tolerance, mutual understanding and reconciliation in order to prevent new conflicts” he underlines.

Miroslav Lajčák also says that Slovakia actively follows the peacekeeping reform debate in UN, especially among the UN Security Council permanent members in connection to UNFICYP, and strongly supports further strengthening of UN peacekeeping operations within the ongoing reform of the UN peace and security pillar. “In particular, we appreciate the vision and leadership of UN Secretary-General António Guterres in making UN peacekeeping operations a more effective instrument within the UN peace and security toolbox” he adds.

He also says that Slovakia remains committed to the implementation of the Declaration of Shared Commitments on UN Peacekeeping, aimed at mobilizing all partners and stakeholders in support of more effective UN peacekeeping.

He also notes that since 2001, Slovakia is not only active in UN peacekeeping in Cyprus, but is from the beginning a leading nation, while more recently it took over the whole of Sector 4 in UNFICYP with the aim of strengthening command and control. Slovakia’s robust presence in UNFICYP, with 220 men and 22 women is according to the Minister “yet another confirmation of our strong commitment to peace and stability on the divided island.”

The Slovak Foreign and European Minister says that he does not expect another major re-configuration of UNICYP in the near future, “but the relevant decisions remain with the UN Security Council and we fully respect them.” He assures that “Slovakia will remain involved in UNFICYP for as long as necessary, therefore, we are currently not re-evaluating the participation of Slovak soldiers in Cyprus. ”The Minister says that Slovak soldiers are already preparing for regular rotation in autumn. “At the same time, we sincerely wish for the political process to yield results. If it does, we will not be unhappy to see UNFICYP becoming redundant” he remarks.

As for his assessment of Bratislava’s engagement in facilitating bicommunal dialogue on the island for the past 30 years, the Minister says that his country has always stood in solidarity with Cyprus, with regard to the Cyprus issue. “We have been involved for 30 years in the bi-communal dialogue between Greek Cypriot and Turkish Cypriot political parties. The Slovak peacekeeping forces have been active in the UNFICYP mission for 18 years. This engagement reflects our deep interest to create peaceful and constructive platform for Cypriots, to give both sides a fair opportunity and room for exchange of their views and positions on the Cyprus problem” he says.

Lajčák notes moreover that the most tangible result of Bratislava´s engagement and effort is the “still existing and alive” bi-communal political forum. “It developed and implemented a number of confidence building measures, such as visits to places of worship, to cultural heritage sites, to the crossing points in construction. It seems nowadays that this dialogue is almost the only communication channel between people living in the two parts of the divided island” he says.

He notes, moreover, that the Slovak Republic is ready to continue playing the role of an honest broker and an impartial mediator, adding that a United Cyprus could serve as an important pillar of peace and stability in the fragile region of Eastern Mediterranean.

Asked about Cyprus’ involvement in trilateral initiatives in the region, the Minister notes the country’s strategic geographical position in the Eastern Mediterranean “where the interests of big powers compete.” Cyprus plays an extremely important role in European foreign and security policy, the Minister continues. “As the OSCE´s Chairperson-in-Office I appreciate very much a set of all trilateral initiatives promoted by Cyprus with its neighbors. It strengths regional stability, security and cooperation in this part of the world. I have no doubt that the resolution of the Cyprus problem would revolutionize the prospect for the development of political, energy, trade and social cooperation among the countries of the region, including Turkey” he says.

Finally, Lajčák says that the OSCE highly appreciates the positive example of CBMs completed in Cyprus and strongly supports the exchange of lessons learned and practices among UN and OSCE, as well as EU mediating teams.

Slovakia’s Foreign and European Affairs Minister Miroslav Lajčák is paying a visit to Cyprus, on the occasion of the 30th anniversary of the bi-communal dialogue of Greek Cypriot and Turkish Cypriot political parties, held under the auspices of the Embassy of former Czechoslovakia initially and the Slovak Embassy subsequently.

Lajčák will meet, among others, with Foreign Minister Nikos Christodoulides and the President of the House of Representatives Demetris Syllouris, and he will also attend the meeting of Greek Cypriot and Turkish Cypriot political parties.

Together with Elizabeth Spehar, the Special Representative of the UN Secretary General to Cyprus and Chief of UNFICYP, they will be the keynote speakers at an international conference, on Tuesday, on the “30 years of the dialogue between Greek Cypriot and Turkish Cypriot political parties in service of peace in Cyprus.”

The Slovak Foreign Minister will also inaugurate a photo exhibition, marking 30 years of peace dialogue under the auspices of Slovak diplomacy.