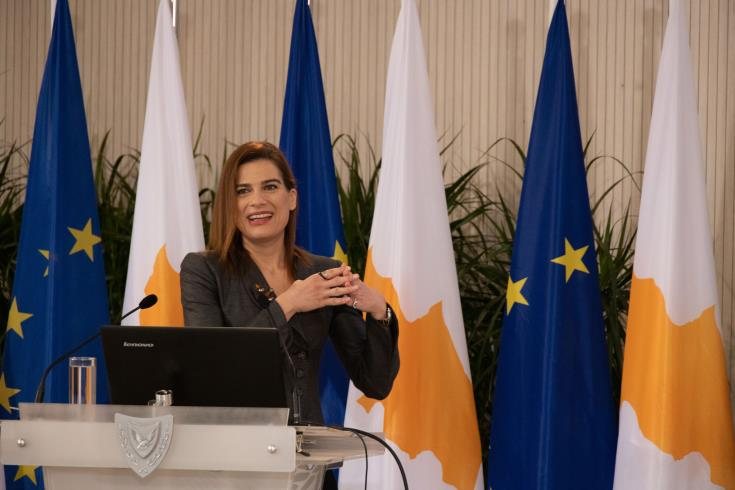 Energy, Commerce and Industry Minister Natasa Pilides will discuss in Huston, US, with her Egyptian counterpart and the Chairman of Chevron, issues related with the inter-state cooperation about infrastructure for the production and transport of natural gas from the "Aphrodite" well in Cyprus` EEZ, to Egypt.

Pilides will have important meetings on energy matters with her counterparts, state officials and high ranking officers of US companies which are licensed in the Republic of Cyprus` Exclusive Economic Zone (EEZ), while she will also take part in the 23rd World Petroleum Congress, set to taje place in Huston, Texas. Among others, she will have a meeting with ExxonMobil Vice President with whom they will discuss the company`s exploration schedule.

On Monday morning (local time), Pilides will have a joint meeting with Tarek El – Molla, Egypt`s Minister of Petroleum and Mineral Resources and Clay Neff, President of Chevron Middle East, Africa, South America with whom she will discuss planning and the necessary inter-state cooperation in relation to infrastructure for the production and transport of natural gas from the "Aphrodite" well in block 12 of Cypurs` EEZ to Egypt, an Energy Ministry press release says.

She will then have a private meeting with Neff in the context of continuous contacts taking place between the Ministry and Chevron on the progress the company has made in finalising the Development and Production Plan for "Aphrodite", it adds.

On Tuesday, the Energy Minister will take part together with her counterparts from the United States, Romania and Kenya in a ministerial round table discussion in the context of the 23rd World Petroleum Congress, entitled "Energy Cooperation: A new agenda for the changing energy landscape."

Pilides is expected to outline Cyprus` strategy and regional initiatives for a transition to green energy, as well as the effort to develop a comprehensive action plan to deal with the impact of climate change in the Eastern Mediterranean and the Middle East. She will further refer to Cyprus` intention to work, in the framework of the Cypriot presidency of the East Mediterranean Gas Forum in 2022, to expand the organisation`s agenda aiming to promote policies and actions which will help our region become a leader in energy transition and sustainable growth.

Following the round table discussion, she will meet with International Energy Forum`s Secretary General Joseph McMonigle. During the same day she will also have a meeting with John Ardill, Senior Vice President of Acquisitions & Divestments (A&D) for ExxonMobil Upstream with whom they will discuss the company`s exploration program.

As has been already officially announced, the ExxonMobil and Qatar Energy consortium will go ahead before the end of this year with a confirmatory drill in the "Glaucus" well in block 10 of Cyprus` EEZ, while in the coming days the exploration and proportional production sharing contract for the licensing of block 5 to the consortium.