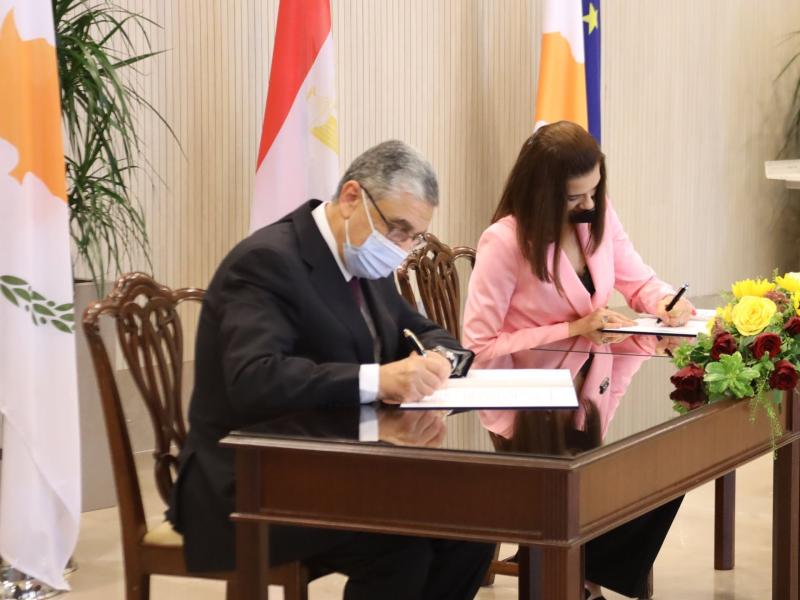 Cyprus and Egypt have signed on Saturday in Nicosia a Memorandum of Understanding for the electricity interconnection between the two countries.

The memorandum was signed at the Presidential Palace on behalf of Cyprus by Minister of Energy, Commerce and Industry, Natasa Pilides and Minister of Electricity and Renewable Energy Mohamed Shaker El-Markabi.

In a joint Statement the two Ministers on the occasion of the signing of the Memorandum of Understanding on Cooperation in relation to Electricity Cross-Border Interconnection between Cyprus and Egypt Transmission Networks, note it represents an important component of the ongoing strong relations and strategic cooperation between them.

The statement said, “the two Ministries, in recognising that the cross-border Electricity Interconnection of the transmissions networks of the two countries represents an important component of the ongoing strong relations and strategic cooperation between them, view this Interconnection as a major step forward for providing the necessary synergies that will facilitate the integration of additional renewable energy sources in their respective electricity and primary energy supply mixes”.

In this context, it added, “the Ministers agree to establish a general framework of cooperation to enable the planning, permitting, development and implementation of the Electricity Interconnection. Inter alia, such cooperation will involve facilitating the timely granting of permits and approvals, both for carrying out all necessary studies on the technical and economic levels and for implementation of the interconnection, the discussions and coordination between Regulatory Authorities and Electricity Transmission System Operators and coordination of appropriate measures to ensure the safety and security of the Electricity Interconnection”.

To review and monitor the implementation of the MoU, regular meetings will be held by the Ministers or their representatives, the statement concluded.

In her opening remarks, Minister of Energy Pelides said the MoU signed “marks an important milestone in the joint efforts of the two countries to promote regional collaboration in the field of energy. And of course, it reaffirms the strong bonds between our people”.

Building on the work done by the two governments over the past few years, she said, especially during the trilateral summits of the Heads of State, “the MoU enhances further the cooperation between Cyprus, and Egypt in supporting the planning, development and implementation of the electricity interconnection of the two countries, as an additional element of the emerging Eastern Mediterranean Energy Corridor”.

For Cyprus, she said, “this electricity interconnection with Egypt, one of our valued strategic allies in the region, has the potential to constitute a cornerstone of our efforts to transition to a green economy, enhancing both countries’ ability to meet our respective commitments under the Paris Agreement on Climate Change”.

There is no doubt that Cyprus and Egypt have so much to gain from the implementation of the Interconnection. Fortifying our electricity grids and allowing the further integration of Renewables in our respective energy mix, enhancing the security of our energy supply and enabling us to become exporters of energy, are but a few of the tangible benefits, which we hope to harness in the most efficient way possible through today’s MoU, the Cypriot Energy Minister said.

Pelides remarked that they need to work closely together in facilitating the timely granting of permits and approvals needed for carrying out both feasibility studies and the construction works of the electricity interconnection, as well as the discussions and coordination between our national electricity Regulatory Authorities and Transmission System Operators. “Moreover, we must coordinate on all the appropriate measures to ensure the safety and security of the interconnection during the implementation period, as well as throughout the life of the project”, she added and said a working group consisting of representatives by both Ministries, will be set up to review and monitor its implementation.

In his remarks, Dr. Mohamed Shaker El Markabi Minister of Electricity and Renewable Energy of Egypt said the electrical Interconnection has many benefits to meet the country electricity needs including securing and stabilizing the electrical system, reducing reserve margin to cope with emergencies, and diversification of electrical energy sources. In addition, many benefits at different economics, environmental and political levels.

The electrical Interconnection between Egypt and Cyprus will achieve to build strong and well-connected networks across the Eastern Mediterranean in order to enhance security and reliability of energy supply, enhance the further development and penetration of electricity generated from renewable energy sources in the national, regional and EU electricity mixes, utilizing the electricity surplus that has been maintained or will be further maintained in the future.

Egypt, he added, is targeting a powerful and reliable energy system to support a long-term, sustainable economic development and securing of electricity supply as well as ensuring the reliability has been on the top priorities of the Government agenda, we added more than 28 GW in the last few years and we turned to surplus. Currently the sector is focusing on the improvement and upgrading the national grid to comply with the international standards and to accommodate the new capacities with high share of renewable energies.

In the frame of the accelerated global interest in renewable energies because of the growing awareness of climate change and decline of fossil fuel reserves and given that Egypt is rich in natural resources. The government, he said, has allocated more than 7600 km² of lands for renewable energy projects with a total potential of more than 90 GW.

Today, he added, “we are in very important moment that initiating the first step of Electrical interconnection project with Cyprus and Finally, I would like to thank the Cypriot and Egyptian sides for their efforts that made us come to this important step and I am confident that the Electrical interconnection project will open the floor gate of cooperation between our countries”.

Asked how important this agreement is for Egypt, El Markabi said “the interconnection between Cyprus and Egypt is one important project at least for Egypt and I believe for Cyprus as well because you know by this way we can do an interconnection where we are generating a lot of renewable energy and I think we can share this with our colleagues here in Cyprus”.

He said it is “very important for both countries and we are determined in order to really reach the real implementation of the project in eventual time, especially that the experts from both sides know each other and how we can reach a conclusion in eventual time”.

He also said he expects that eventually, experts from both sides will start to meet to really go for the proper steps to implement what has already been signed.

She added that Egypt is proceeding quite fast with the introduction of renewable sources of energy and has secured the production of electricity at fairly low prices. This means, she said, that many opportunities arise for cooperation in the field of technology as well. The two, she said, also discussed cooperation in fields such as green hydrogen and “we have already discussed which technical teams could be set up that would work very intensively to move forward with the various projects that have already been identified and agreed”.