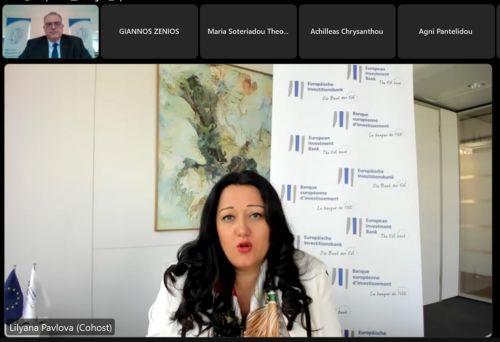 EU and Cyprus economies are facing the “twin problem” of rising commodity and energy prices and heightened uncertainty following the invasion of Russia in Ukraine, a conference held by the Nicosia Chamber of Commerce and Industry and the European Investment Bank (EIB) has heard.

“The war really threatens the EU economy with twin problems from the continued dramatic increase in energy prices, increasing inflation and massive uncertainty,” EIB Vice President Lilyana Pavlova said speaking to the virtual conference on Monday, adding “we are transitioning to a new normal.”

She said that the EIB has a strong pipeline of projects for Cyprus, reiterating “our strong commitment and willingness to work as a trusted partner to Cyprus.”

“In the current circumstances we can shape how this newly emerging environment will look like, how European enterprises and how Cypriot companies are positioning in the new environment and a lot will depend on lot on investments.”

The Cypriot Finance Minister Constantinos Petrides recalled his address to the Cypriot parliament in end-2021 over the 2022 state budget when he noted that “we should be prepared for the next crisis.”

“And, indeed, it came sooner than anticipated with the Russian invasion and the sanctions,” he said.

Petrides appeared optimistic that Cyprus will mitigate the impact of the crisis especially from the loss of Russian tourists to Cyprus, which constitute 20% of the island’s tourist product, by establishing alternative destinations from other European markets.

But he noted “what is of more concern is inflation,” noting that energy prices in many economies resemble the oil crisis of 1973.

“We are close to seeing a double digit increase of inflation due to energy prices increase in most of the European countries, that will definitely affect the demand and supply for goods and services,” he said.

The Cypriot Minister stressed the need for the implementation of the National Recovery and Resilience Plan utilising €1.2 billion which would a multiplier effect to the economy.

“We do need to work together with the banking institutions and the private sector to utilise these funds as quickly as possible,” he added.

On his part Constantinos Herodotou, the Governor of the Central Bank of Cyprus said that the bank has downgraded its projections over the Cypriot growth to 2.3% of GDP in 2022 compared to 3.6% in the previous projection in end-2021.

He noted that Cyprus’ medium term economic outlook remains positive supported by disbursement of the EU Recovery and Resilience funds, amounting of 1.2 billion.

Moreover, inflation is expected to register a “substantial increase” estimated to climb to 6.7% in 2022 compared to the 2.5% of the initial estimate.

However, the CBC Governor said that the Cypriot banks enter the crisis on a better footing as their fundamentals have “improved tangibly.”

Christodoulos Angastiniotis, President of the Cyprus Chamber of Commerce and Industry, said the chamber is “pressing hard for the introduction of an enterprises support scheme for the provision of loans with government guarantees.”

“The priorities have certainly changed, since now the main concern of the business sector is how to overcome liquidity issues and secure their survival,” he said.

He also noted that “of utmost importance for us is to make the best use” of the 4.2 billion euro which will be delivered to Cyprus through the EU Recovery Plan and structural funds.

Opening the conference, Michalis Mousioutas, President of the Nicosia Chamber of Commerce and Industry, said “Cyprus together with the rest of Europe is going through an unprecedented occurrence of shocks in the 21st century”.

“As we were trying to exit this first big shock of the pandemic which brought about a huge setback to our economies the war in Ukraine has further deteriorated the situation by creating additional problems for the business sector which is experiencing exceptional energy costs, price increases disruption in the supply and sustainability constraints,” he added.