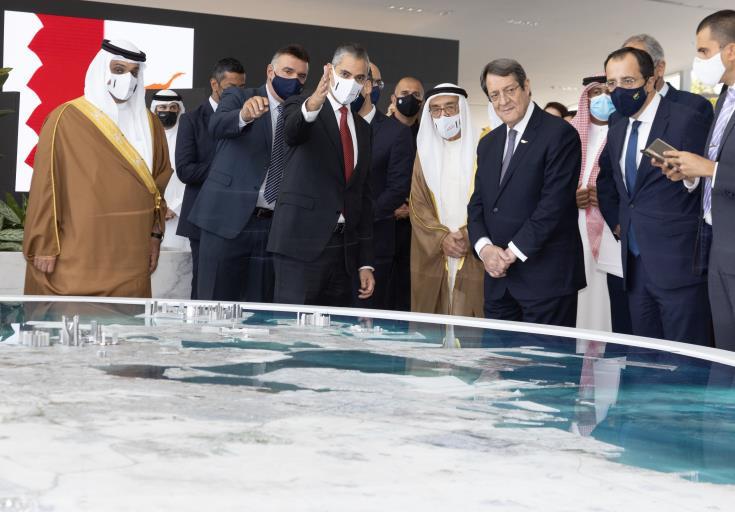 The Ministers who accompany the President of the Republic Nikos Anastasiades in his official visit to Bahrain, met Monday afternoon with their counterparts in the country and discussed bilateral cooperation.

An Presidency press release says that Minister of Energy, Trade and Industry Natasa Pilides had separate meetings with the Minister of Petroleum of Bahrain and the Minister of Commerce. In statements after the meeting, she said that there are many common aims with Bahrain in many areas such as investment and investment funds, trade and export of local products, noting that she looks forward to holding a business forum of the two countries soon.

For the energy sector, Pilides referred, among other things, to Cyprus` plans in the area of hydrocarbons and electricity noting that there is much to be learned in terms of know-how from Bahrain.

The Bahraini Minister of Commerce said that they look forward to further strengthening the cooperation in the field of trade. The Minister of Petroleum said that Cyprus has achieved a lot and congratulated Pilides for the excellent level of work performed by her Ministry.

The Minister of Agriculture, Rural Development and Environment, Costas Kadis, also had a meeting with his counterparts. He said that there is mutual interest in further co-operation in the areas of fish farming, climate change and agriculture. He added that a Memorandum of Understanding will also be prepared for cooperation in the fields of agriculture and management of water resources.

Deputy Minister of Tourism Savvas Perdios had a meeting with the Minister of Tourism of Bahrain and expressed satisfaction with the intention of Bahrain’s national air carrier  to expand its activities in Cyprus, adding that the two countries can do a lot in the field of tourism. Perdios said that he is staying in Bahrain until the end of the week, for meetings with stakeholders in the fields of aviation and tourism.

The Bahraini Minister of Tourism said that Cyprus is a traditional destination for Gulf Air and added that they expect to expand their destinations via Cyprus. Government Spokesman Marios Pelekanos had a meeting with the Deputy Director for Bahraini Media.