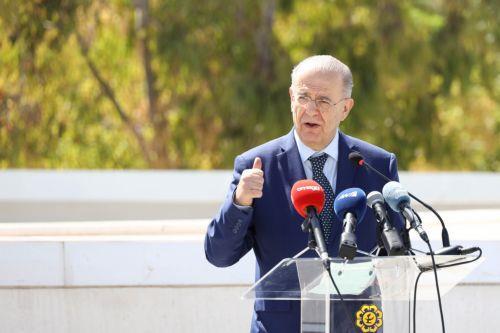 Cyprus' services sector cannot be further affected by European sanctions against Russia, Foreign Minister Ioannis Kasoulides said on Sunday, adding that sanctions cannot have a more negative impact on member states than on Russia itself.

Kasoulides was speaking on the sidelines of the Europe Day celebrations, which took place on Sunday morning at Eleftheria Square, in the centre of Nicosia.

Asked about the agenda of the online meeting of the Foreign Ministers of Cyprus, Greece, Israel and the United States on Monday, May 9, the Foreign Minister said that the topics identified are the contribution to the security and stability of the region, economic issues, climate and natural disasters, with Cyprus' intervention focusing on the blue economy.

Kasoulides added that the online meeting will be followed by a meeting with a physical presence of the parties involved, by the end of the year. "I believe that we will come up with some decisions to launch actions, which will be monitored by experts and the deliverables of which will be the subject of the next meeting" he added.

Asked about the content of Cyprus' intervention before its European partners in the forthcoming Foreign Affairs Council, in Brussels, the Minister said that "I will focus on what has been proven, namely the unity of the European Union, with which we acted immediately in response to Russia's invasion and we are participating and contributing to this unity."

"Because the packages of restrictive measures are increasing, the aggregate effect is also increasing with them, something that the European Commission must take into account when it comes up with proposals, because it must know what the particularities of each member state are. The sanctions are being introduced to be our protest, to stop Russia's war machine from interfering in Ukraine. These sanctions cannot have more of a negative effect on member states than on Russia itself," he said.

Asked to comment on the insecurity that currently pervades the commercial world of Cyprus as the sixth package of sanctions specifically targets services and with Cyprus' services being directly linked to Russian funds, Kasoulides said that "huge efforts have been made to protect our services sector from disproportionate decisions in what concerns us because other member states are facing other problems. For example, we do not have the problem of importing gas or oil from Russia, while others are much more dependent. But we have three sectors, tourism, which has been hit, shipping and services, these cannot be hit further”.

Finally, when asked whether Cyprus would support the removal of the necessary unanimity for decision-making in the European Council, the Foreign Minister said that small states cannot accept such a proposal. "There are other very serious issues where many member states have special interests in other areas, not only in the field of foreign policy. Cyprus is in favour of unanimity in the field of foreign policy” he concluded.