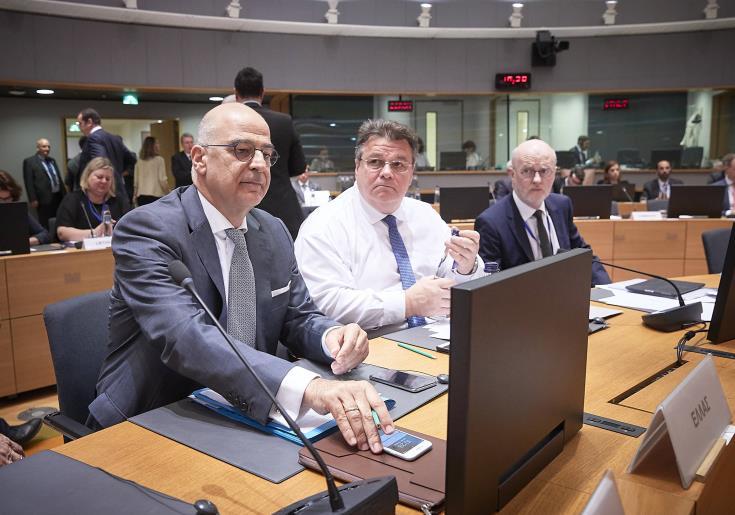 His first official meeting with new Foreign Minister of Greece, Nikos Dendias, had this morning in Brussels ahead of the EU Foreign Affairs Council, Cyprus Foreign Minister Nikos Christodoulides.

As announced after the meeting, Christodoulides "had the opportunity to make in-depth briefing of his Greek counterpart on the current developments in the Cyprus issue and the ongoing Turkish illegal actions within the territorial waters and the EEZ of the Republic of Cyprus."

As noted,  the excellent level of cooperation between the two countries was reaffirmed at the meeting, with the two Ministers underlining their commitment to continue and further enhancing close co-operation, both bilaterally and at European level. It is noted that " the importance of the joint action of Cyprus and Greece in the context of tripartite partnerships as well as of the EU-Mediterranean Mediterranean Member States (MED-7) was emphasized".

It was also announced that the two Ministers agreed to be in constant contact, both at political and service level, for coordination and joint action at the international level.

The two Ministers will have the opportunity to attend extended talks when Nikos Dendias will accompany the Greek Prime Minister Kyriakos Mitsotakis during the official visit of the Greek Prime Minister to Cyprus in the near future.
Turkey issued in May a navigational telex, announcing its intention to start drilling off Cyprus until September 3. Since May 4, the Turkish drill ship “Fatih” is anchored in an area that falls within the EEZ and continental shelf of the Republic of Cyprus.