President travels to China for Second Belt and Road Forum 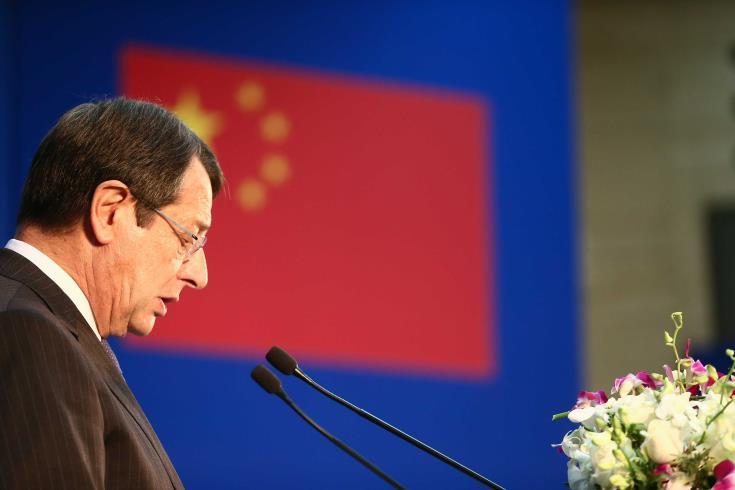 President of the Republic Nicos Anastasiades travels to China on Monday, at the invitation of the President of the People΄s Republic of China Xi Jinping, to attend the Second Belt and Road Forum, Government Spokesman Prodromos Prodromou, told reporters on Monday.

The President will hold a series of contacts with foreign leaders in China, including Russian President Putin.

Around 40 heads of state will attend the Forum.

Cyprus, said Prodromou, a country that has always been a trade hub and has had a prominent position in international connectivity, while now is part of the international energy map, is especially interested in developing its position and promote its advantages as an EU member state in this upgraded relationship between Europe and Asia that has been cultivated at the initiative of the Chinese Government.

The Spokesman noted that Cyprus, acting in line with international regulations, fair trade and transactions and transparency, supports the Belt and Road Initiative, because “we see that through multilateral partnerships and upgraded connectivity, in the era of globalization, there are advantages for our country and the prosperity of our people”.

Prodromou said that in the framework of their bilateral cooperation the two countries would sign two Memoranda of Understanding on Education and Cultural Cooperation for the period 2019-2020 and on Cooperation in the Framework of the Economic Belt and the 21st Century Maritime Silk Road.

He said that the Deputy Minister for Tourism would hold a series of bilateral contacts as part of the efforts to promote Cyprus as a tourist destination and to advance the island’s connectivity with the large Chinese market.

During his stay in Beijing, the President will hold an official meeting with Chinese President Xi Jinping. President Anastasiades, said Prodromou, aims to further deepen the already very good relations with China and to seek cutting-edge sectors to promote bilateral cooperation with mutual benefit, such as tertiary education and culture, tourism, investments and connectivity.

Taking into account the fact that China is the second largest economy in the world, the President looks forward to positive results, he noted.

Furthermore, Prodromou stressed that the President will inform his Chinese counterpart about his efforts to make use of the readiness of the UN Secretary General in order to restart the Cyprus talks and will ask the Chinese President to support both the efforts to curb Turkey’s intransigence and utilize the Security Council for the solution as well as the preservation of UNFICYP΄s role and mission.

He also noted that a meeting has been arranged between President Anastasiades and Russia’s President Vladimir Putin. In this new meeting with the Russian President, President Anastasiades will brief him about his efforts to restart the talks from the point these were left off in Crans Montana, Switzerland, and that he is ready to utilize the six parameters of the UN Secretary General in order to render Cyprus a truly independent state, without guarantees.

According to Prodromou, Anastasiades will also refer to the role that the UN Security Council could play in the solution of the Cyprus problem, as well as in safeguarding UNFICYP΄s role and mission.

The President is expected to hold a meeting with the Prime Minister of Vietnam and other foreign leaders, as well but more will be announced later, he concluded.