12/11/2012 16:56
The world’s biggest investors say the rout that erased $1 trillion from the value of global equities after President Barack Obama was re-elected overlooks the fact that the world economy is improving while U.S. leaders start discussions that may avoid the so-called fiscal cliff.

Money managers at firms overseeing more than $8 trillion said investor concern that the U.S. economy will slow as Obama and Congress fail to avert $607 billion in tax increases and spending cuts next year are overblown. U.S. stocks had the biggest weekly decline since June while yields on Treasuries fell to two-month lows and gold advanced the most since September.

From jobs to housing, and from consumer confidence to international trade, U.S. data show the world’s largest economy is strengthening. In China, the second-largest, exports rose about 10 percent in both October and September from a year before, up from gains of less than 3 percent the prior two months. Companies worldwide from the most creditworthy to the neediest are borrowing in capital markets at the second-fastest pace on record and at the cheapest rates ever.

“It’s astonishing that now the market is turning so quickly and we don’t understand that,” said Bettina Mueller, a money manager in Frankfurt at Deutsche Bank AG’s DWS Investments unit, which oversees about $350 billion. “Our expectation regarding the fiscal cliff is that both sides will come to a compromise.”

The carnage was widespread. The MSCI All-Country World Index (MXWD) of stocks fell 2.55 percent in the three days after the Nov. 6 vote. In the U.S., the Standard & Poor’s 500 Index slid 3.4 percent.

Investors retreating from riskier assets pushed the yield on the benchmark 10-year Treasury to 1.61 percent from 1.75 percent. The Dollar Index (DXY), which measures the greenback against six major trading partners, jumped to a two-month high. Gold futures for December delivery reached $1,730.90 an ounce.

Money managers with the most at stake said they are increasing holdings of securities that benefit from expanding economies instead of preparing for another U.S.-led recession.

Pacific Investment Management Co., which manages $1.92 trillion including the world’s largest bond fund, sees as much as a 70 percent chance that U.S. lawmakers will compromise to avoid the spending cuts and tax increases.

“No one in their right mind would push our country into recession,” Mohamed El-Erian, the chief executive officer of Newport Beach, California-based Pimco, said Nov. 9 in a radio interview on “Bloomberg Surveillance” with Tom Keene and Ken Prewitt. “The major issue for us is not that we resolve the fiscal cliff but do we do it in a way that allows Washington to pivot to turning headwinds into tailwinds.”

The biggest holdings in Pimco’s flagship fund, the $281 billion Total Return Fund (PTTRX), are mortgage and related securities, which make up 47 percent of assets, according to a Nov. 9 report on the firm’s website.

“If we get through” the fiscal cliff “and we see the clarity that there won’t be the very extreme downside for markets, then we have a very good outlook following that,” Rosenberg said at Bloomberg’s Portfolio Manager Mash-Up conference in New York on Nov. 8. “We’re still in this environment of persistent low interest rates.”

DWS cut its holdings of Treasuries to “underweight” from “neutral” after the election on speculation the rally was “overdone,” Mueller said. Treasury 10-year yields will likely rise to 2.32 percent by the end of next year, according to the median estimate of more than 80 economists and strategist surveyed by Bloomberg News.

“We’re in for a period of volatility but in the end some agreement will be reached because reaching one is good politics,” Chris Iggo, Axa’s chief investment officer for fixed-income, said in a Nov. 9 interview.

Stock analysts predict gains next year for U.S. equities. The S&P 500 will rise about 14 percent to 1,585 by the end of 2013 as earnings climb about 5 percent to $106.24 a share, according to forecasts from 15 Wall Street strategists tracked by Bloomberg.

The estimates imply a price earnings multiple of 14.9, about 9 percent below the average valuation since the 1950s, according to data compiled by Bloomberg.

“We’re not selling stocks here,” Paul Zemsky, the New York-based head of asset allocation for ING Investment Management, which oversees $170 billion, said in a Nov. 9 telephone interview. “Assuming we get some sort of compromise on the fiscal cliff issue, fundamentals are pretty good and stocks are not expensive.”

Markets were whipsawed immediately after Obama defeated Mitt Romney. The election left the split between Democrats and Republicans largely intact, which is the worst possible outcome because it gives both sides room to claim “a mandate for their policies,” according to Barclays Plc strategist Barry Knapp in New York.

After being declared winner in Florida on Nov. 10, four days after securing a second term, Obama’s electoral vote count rose to 332, compared with Romney’s 206. A total of 270 was needed to take the presidency.

While Obama will meet Nov. 16 with House Speaker John Boehner, Senate Majority Leader Harry Reid, Senate Republican leader Mitch McConnell and House Democratic leader Nancy Pelosi, to avert another budget showdown, the Congressional Budget Office said Nov. 8 that the tax increases and spending cuts may trigger a recession. The changes would cause gross domestic product to contract 0.5 percent in 2013 and push unemployment to 9.1 percent from 7.9 percent in October.

Obama and Congressional Democrats want to let tax cuts expire for individual incomes above $200,000 a year, while Republicans advocate extending them for all levels. The president wants to boost the two top rates to the levels they reached when Bill Clinton left office in 2001 -- 36 percent and 39.6 percent. He also wants higher taxes on capital gains and dividends and a smaller estate tax exemption and higher rate.

“We see little reason to increase the probability of avoiding the tax cliff or brinksmanship over the debt ceiling, or to expect pro-growth tax and entitlement reform in 2013,” Knapp wrote in a Nov. 8 research report. The firm sees 10-year Treasuries yields falling to 1.5 percent by year-end.

Even if the worst case -- prolonged political gridlock that sends the economy over the edge -- doesn’t occur, some fiscal policy changes will drag on growth.

A two-year payroll tax holiday is scheduled to end Dec. 31 along with extended unemployment benefits, plus a new tax on investment income earmarked to help pay for the administration’s health care overhaul will begin.

“There’s a significant amount of fiscal restraint already baked into the cake,” says David Stockton, who retired Sept. 30 as the Federal Reserve Board’s director of economic research and forecasting.

Yields on 10-year Treasuries at about 1.68 percent imply the economy will tip into recession in the next year, Terry Belton, the global head of fixed-income and foreign-exchange research at JPMorgan Chase & Co., said in a video to clients on Nov. 5.

Rates on bonds are out of synch with economic data that signals the economy will continue to grow and expectations that the political impasse will be resolved, Belton said.

“A lot of things have moved where investors should have been willing to take more risk,” Belton said Nov. 8 in a telephone interview. “Just the resolution of the uncertainty I think will be an important catalyst for markets. It should push Treasury rates higher and equities higher.”

Belton said in his video report that he expects 10-year Treasuries to yield 2 percent by the end of 2012.

A net 171,000 workers were added to payrolls in October, after a 148,000 gain in September that was more than first estimated, Labor Department figures showed Nov. 2 in Washington. The Thomson Reuters/University of Michigan preliminary consumer sentiment index rose to 84.9 in November, the fourth straight increase and the highest since July 2007.

Residential real-estate prices as measured by the latest S&P/Case-Shiller index of property values in 20 cities increased 2 percent in the 12 months ended August, the biggest rise in two years.

“The consumer is like an ocean-going vessel, it’s so large,” Richard Weiss, who oversees $16 billion as a senior portfolio manager at American Century Investment in Mountain View, California, said in a Bloomberg Television interview. “It doesn’t make hairpin turns. It has a lot of slow but strong momentum and we envision it pushing us into 2013 regardless.”

Corporate America is strengthening, too. Exports from the U.S. climbed to a record in September, contributing to an unexpected 5.1 percent decline in the trade deficit to $41.5 billion, Commerce Department figures showed last week. The gain in sales to overseas buyers was broad-based, with improvement in everything from soybeans to fuel and civilian aircraft.

The economy may have expanded at a 3.2 percent annual rate in the third quarter, according to economists at Barclays and JPMorgan. The Commerce Department’s first estimate, issued last month, was 2 percent.

Confidence in the economy is emboldening investors and banks to increase lending to companies at ever lower rates.

Corporate borrowers around the world have sold $3.45 trillion of bonds this year, second only to the $3.93 trillion issues in all of 2009, Bloomberg data show. Yields fell to an average of 2.6 percent last week, from more than 7 percent in early 2009, Bank of America Merrill Lynch indexes show.

In China, exports rose at the fastest pace in five months in October, adding to signs of a rebound after industrial output and retail sales exceeded forecasts. Overseas shipments increased 11.6 percent from a year earlier, the Beijing-based customs administration said in a Nov. 10 statement.

Volatility across markets has declined, signaling investors are less worried about the outlook for the economy with central banks in the U.S., Europe and Japan providing unprecedented stimulus.

JPMorgan’s G7 Volatility Index of currencies has fallen 51 percent from the high in September 2011 to 7.5 as of Nov. 9 after reaching a record-low 7.4 on Nov. 1. Bank of America Merrill Lynch’s Option Volatility Estimate MOVE Index covering Treasuries has declined 38 percent this year from its high. The Chicago Board Options Exchange Volatility Index, known as the VIX, ended last week at 18.61, below its high for the year of 27.73 in June.

“We’re of the mind that they will come to a decision in the next months,” Kathy Jones, a fixed-income strategist in New York for Charles Schwab Corp., which has about $1.7 trillion in client assets, said in reference to the fiscal cliff talks. “It’s a question of how much and how soon.”

Copper reached a two-month low after the election, while crude oil traded near a four-month low. The S&P GSCI Spot Index of 24 raw materials is down 1.3 percent since Nov. 6.

The plunge in markets may be what it takes to force Washington to reach a compromise, said Jay Schwister, managing director and senior money manager in Milwaukee, Wisconsin, at Baird Advisors, which oversees $17 billion of bonds.

“What level of crisis is going to be required to give politicians on both sides of the aisle enough cover to come to the middle and make a compromise?” Schwister said Nov. 8 in a telephone interview. “It’s clearly a scenario that has at least some probability of playing out. At least a couple of days of going over the cliff to get everybody focused. It might take that.” 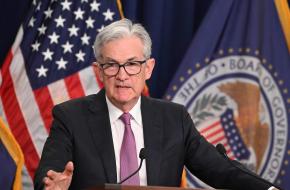 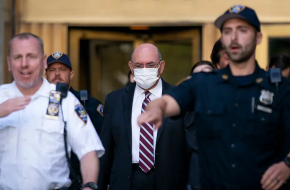 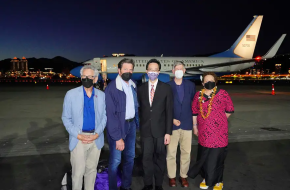 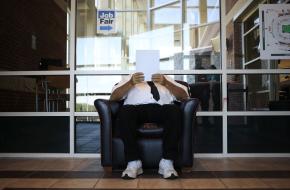