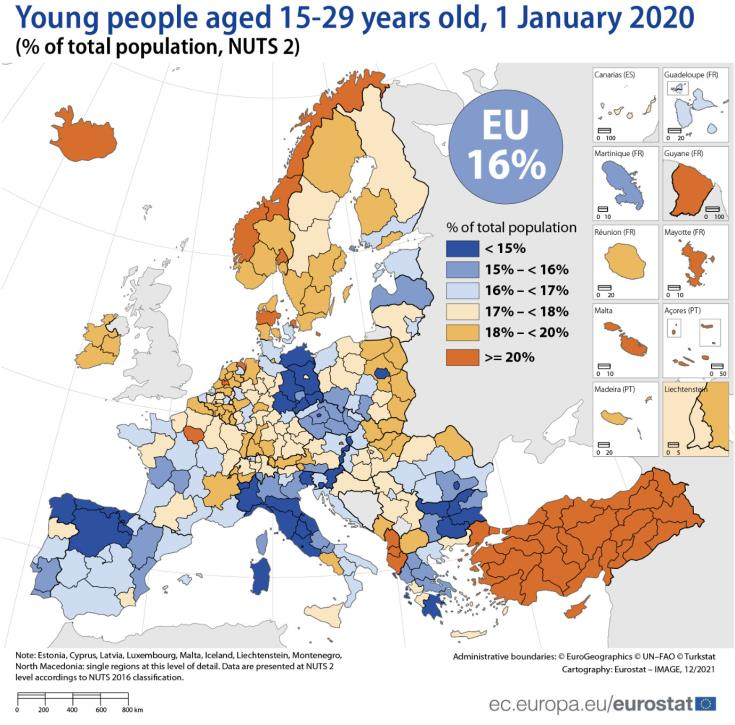 Cyprus is one of the areas in Europe with the largest percentage of young people aged between 15 to 29, namely 21% compared with an EU average of 16%, according to data presented by Eurostat, the EU’s statistical service, on the occasion of 2022 having been named the European Year of Youth.

Among the EU Member States, the Île-de-France region (on the NUTS 2 level of analysis) had the highest number of young people between 15 and 29 years old in 2020 (2.4 million).

However, relative to population size, the highest shares of 15 to 29 year-olds in the EU were found in French Guiana and Mayotte (both in France) as well as Groningen (in the Netherlands), where 23% of the population were young people.

These were closely followed by Cyprus (single region at this level of detail), the Capital region of Denmark and the Spanish autonomous region of Melilla (each 21%).

The lowest shares of young people in the EU were found in Chemnitz and Brandenburg in Germany (both 11%), Thuringia, Mecklenburg-Western Pomerania, Saxony-Anhalt (all in Germany), and Asturias in Spain (all 12%).

The highest shares of young men were found in the North Aegean region in Greece (24% of the population), French Guiana and Groningen (both 23%).