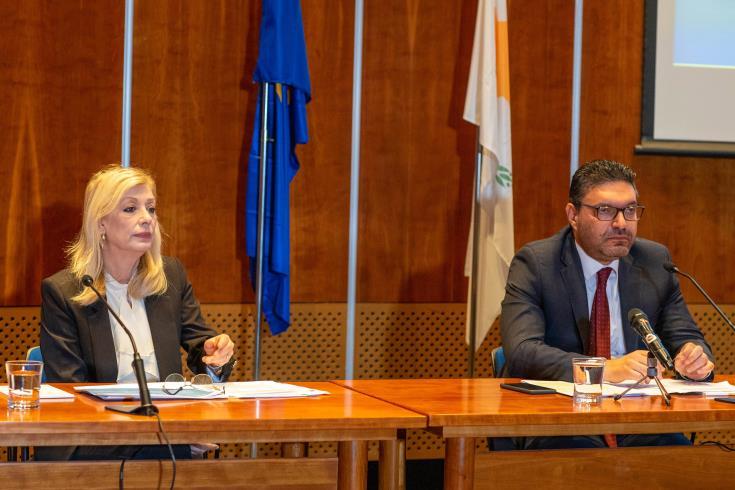 Cyprus Government announced Wednesday a new € 150 million package of measures to support the economy to deal with the effects of the COVID-19 pandemic, in a joint press conference of Finance Minister Constantinos Petrides and Minister of Labor, Welfare and Social Security Zeta Emilianidou.

The new economic support package includes five more targeted plans by the Ministry of Labor, Welfare and Social Security to support workers and businesses over the next four months. Beneficiaries of the plans are expected to rise to 50,000.

"With the five plans, as we had promised, we continues to offer a safety net for the protection of employees" said Emilianidou.

She explained that the monthly cost of the five plans, would be between € 35 million and € 40 million, noting, however, that it also depends on the turnover reduction of each company, that will participate in these plans.

On his part, the Minister of Finance stressed that the new plans are mainly based on a more targeted continuation of employment support measures in areas of activity that continue to be affected by the pandemic, and their implementation will be governed by a stricter framework, to prevent any abuse.

Petrides also announced a Cabinet’s decision to approve a Guarantee Agreement amounting to € 38.11 million to the European Commission, for Cyprus` participation in "SURE" mechanism, which aims to protect jobs affected by the pandemic.

The Minister pointed out that Cyprus responded immediately and in a coordinated manner, with a comprehensive and coherent three-phase Economy Support Program, noting that the total amount of the Program including fiscal interventions was estimated at around 1.2 billion euros and interventions to support business liquidity were more that € 1.7 billion.

"With the coherent Economy Support Program, the Government has essentially lifted the entire burden of the operation of the economy during the restrictions period, but also during the period of the gradual lifting of the restrictions," said Petrides, noting that 190,000, citizens 26,000 businesses and 22,000 self-employed were supported by public funds. He added that a total of €500 million was given for income subsidy in the three phases of the Support Program.

Moreover, the Minister of Finance said that even more prudence and responsibility in financial management was needed over the next period and stressed that the possibilities of state support and public finances were not unlimited, while there’s still a big uncertainty regarding the course of the pandemic and the international economy.

He also said that in the next period, the continuation of healthy fiscal management should be ensured by shielding public economics, the optimal participation in the programs of the European Union and especially in the Rehabilitation Fund, the revision of Cyprus’ development model which as he said was already in progress and the continuation of reforms. 04/08
Nicosia reservedly optimistic for a deal with Russia on double taxation agreement
04/08
Cyprus issues new classification of countries with amendments for Greece, Thailand and Morocco
04/08
Τhe Ministry of the Interior on obtaining a Special Entry Permit to the Republic of Cyprus
04/08
Ministry announces conclusion of international tender for Larnaca port and marina development