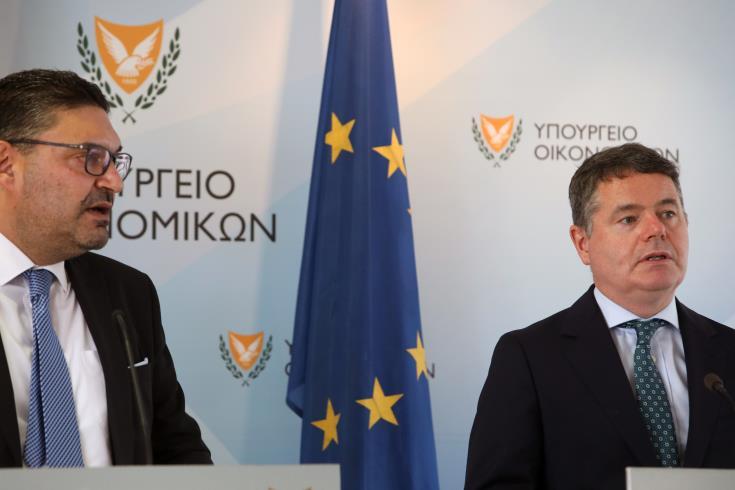 Pascal Donohoe praised Cyprus’ “impressive recovery” from the coronavirus outbreak in 2020, stressing that this performance was the result of good national policies coupled with good decisions taken on a European Union level.

In his first visit since the coronavirus outbreak, Donohe visited Cyprus on Thursday and met with Minister of Finance Constantinos Petrides who stated that by early 2022 Cyprus could recover most if not all of the ground lost during the pandemic.

In a joint press conference, both Donohe and Petrides highlighted the importance of Ireland and Cyprus’ membership of the EU and the Euro area.

“The performance of the Cypriot economy its recovery is so impressive, it has been led by a combination of the right national economic decisions and then the right decisions at a European level and I believe the mixture of these decisions will allow the people of Cyprus to continue to recover from the effects of this disease,” Donohe said in his remarks.

Highlighting Cyprus’ ability to bounce back from the crisis, Donohe said that according to the European Commission projections, Cyprus is set to post a growth rate of just over 4% this year and just below 4% in 2022.

“That is a really strong economic performance in the context of how difficult this disease has been and it is a particularly strong performance given how Cyprus like many other countries in Europe places great value on tourism for employment and also for economic growth,” he said.

The Irish Finance Minister also praised Petrides’ work and the work of the Finance Ministry expertise which is reflected in Cyprus Recovery and Resilience Plan that is going to be discussed in the ECOFIN meeting next Monday and added that the Cypriot plan “has already been warmly received by member of the EU and is already seen to be a really strong plan that will help Cyprus recover from this terrible terrible disease.”

A return to “normal” financial decisions

In his comments Donohoe encouraged reforms and changes as the EU is set to “begin the journey back to sensible economic decisions and to lower levels of borrowing,” but he did not elaborate on when the EU will bring back the fiscal rules of the Stability and Growth Pact which has been suspended since the outbreak of the Covid pandemic.

“We are all borrowing to support our economies at the moment because we have to, because we need to and we all will at the right point begin the journey as to how we reduce our borrowing and to go back to more normal economic policies and we will as a Union (discuss on) what is the right point at which we begin that journey and when that journey begins, we all need to pay our part in implementing the decisions that will be needed then,” he said.

On his part, Petrides said that following a downturn of 5.1% in 2020, which was the lowest recession among other EU members with sizeable tourism sectors, the EU Commission projects a 4.3% growth for 2021.

“So, we believe that by the beginning of 2022 we would have covered most, if not all, of the lost ground due to the pandemic,” he said.

The Cypriot Minister once more stressed the large degree of uncertainty, adding that Cyprus still utilizes the EU flexibility clause to continue providing assistance to crisis hit businesses. “But our joint effort is to return gradually to normality,” he said.

Petrides underlined the importance of the reforms made before the Covid-19 outbreak that allowed Cyprus to be a constructive member of the Eurozone, but also to borrow from the markets in favourable terms in a bid to tackle the crisis while maintain positive credit ratings.

“These reforms,” he went on, “fiscal discipline which is necessary in normal times is what we should safeguard, be it reforms on fiscal discipline or the banking sector and reducing NPLs. All these are preconditions for our euro membership, the largest currency union which is very important for us if we are to protect our fellow citizens.”

“I also want to see an agreement that is capable of recognizing small and medium sized economies as well and it is for that reason that the discussions on global minimum effective tax rate are sensitive and difficult,” he said, adding that “Ireland is going to continue to be part of the negotiations that is underway and I hope that we can be part of the agreement in the future because I do accept that if there is going to be an agreement it will create challenges to some countries including Ireland but I think those challenges and those costs are worth bearing if we can get an agreement on really sensitive issues such as global tax policy.”

Replying to another question, Donohoe also said he advocated for the unanimity rule in the EU for some policy areas.

“We believe that the principle of unanimity in some policy areas is very very important to the EU,” he said, adding however “what we do try to do on the EU is reach decisions on the basis of consensus” as was the case in Eurogroup decisions