The European commission expects a marked improvement in the government's fiscal and primary balances through 2017 at the back of an improving economic outlook.

According to the winter economic forecast text published today in Brussels the primary surplus is expected to increase to 2.6% of GDP in 2016 and stay constant in 2017 while the overall fiscal balance is projected to turn to positive in 2016 and improve further in 2017. 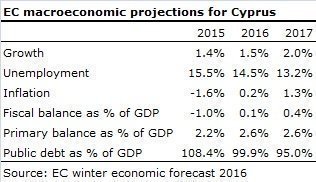 The report states that, “real GDP growth strengthened in the first three quarters of 2015 after spending three years in negative territory. In light of improving short-term indicators, such as economic sentiment and tourist arrivals, real GDP is expected to have grown by 1.4% in 2015 as a whole, driven by both domestic and external demand, with additional support from low inflation and the depreciation of the euro. However, export growth was not sufficiently strong to counterbalance the growth of imports, which rose on the back of stronger domestic demand and the higher number of ship registrations. Therefore, net exports contributed negatively to GDP growth”.

The European Commission says that growth in 2015 was also supported by the slower pace of public spending cuts and the slight increase in investment. “However, investment growth was mainly driven by new registrations of ships in Cyprus, which have a corresponding positive impact on imports and, therefore, no net impact on GDP growth” the EC says, while the labour market improved with employment slowly picking up and unemployment is starting to decline.

According to the forecast text, growth will gain momentum in the following years, while “in 2016, domestic demand is forecast to shape growth, as the support to private consumption from low inflation is set to continue. Investment growth, however, should slow, due to a negative base effect from the high number of ship registrations observed in 2015”.

“Nevertheless, the underlying momentum of investment is gathering strength”, according to the EC text, “alongside the easing of credit supply conditions”.

“The drag from falling inventories and public spending cuts will ease and thus provide some additional support to growth. Net exports are expected to be broadly neutral to GDP growth, as export growth is forecast to slow reflecting that the positive impact from the depreciation of the euro looks set to weaken”, expects the European Commission.

The same analysis shows that “increasing economic growth over the forecast horizon should lead to further labour market improvements. While GDP growth is forecast to reach 1.5% in 2016 and 2.0% in 2017, unemployment is expected to decline to around 13.2% by 2017 from 15.5% in 2015 and 14.4% in 2016. With unemployment still high and inflation expectations still subdued, wage growth should remain muted, in 2016 and 2017. High profit margins, reflecting weakened pass-through of lower unit labour costs on domestic prices, are set to result in only limited upward pressure on prices.”

The Commission finds the upside and downside risks balanced.

“On the upside, the renewed weakness in energy prices and the effects of the past euro’s depreciation could support consumption and exports more than expected”, according to the report.

On the downside, the Commission calculates “the weakening of external demand and the sanctions against Russia could weigh more on activity than forecast. In the financial sector, the slow pace of reduction in the high level of non-performing loans could lead to a more prolonged period of tight credit conditions, which would dampen the recovery”.

The EC in broad terms expects the fiscal adjustment path to remain stable: “the general government primary balance is forecast to reach a surplus of 2.2% of GDP in 2015, with a corresponding headline deficit of 1.0% of GDP.”

“Excluding the one-off effect of banking recapitalisation in 2014, the primary balance is expected to worsen by 0.4 pps. of GDP, largely driven by factors beyond the control of the government, such as new location rules regarding VAT for e-commerce services, the channeling of some revenue to the national banking resolution fund, and a decrease in dividend income from the Central Bank of Cyprus (CBC). The deficit increasing impact of the above mentioned factors are, however, partly compensated by one-off revenues linked to fines imposed by the national competition authority. On the expenditure side, the expected 2015 outcome is affected by higher expenditures related to the closure of Cyprus Airways and the introduction of the new Guaranteed Minimum Income scheme”.

So, the primary surplus is expected to increase to 2.6% of GDP in 2016 and stay constant in 2017, according to the report “largely driven by the improving economic outlook”.

“This rise is expected”, says the EC, “despite the kicking-in of items that had been frozen during the programme, such as increases in wages and pensions. The projections also account for dividend income from the CBC.”

While in 2017 the structural balance “is expected to worsen again despite an improving headline balance, as the output gap turns positive”.

On a positive note the report ends with the improving debt-to-GDP ratio which is projected to peak in 2015 at about 108% and to decline to 95% in 2017. “The peak has been shifted from 2014 to 2015, as the debt-decreasing impact of certain initiatives is now expected to kick-in only in 2016”, according to the EC.
The European Commission expects a significant decrease in unemployment rates from 14,5% and 13,2% for 2016 and 2017, starting at 15,5% in 2015, in Cyprus, according to the winter economic forecast text published today in Brussels.
Previous
Next