The Cypriot economy recorded accelerated growth in the last quarter of 2015, the fourth consecutive quarter of positive performance, based on preliminary estimates of the Statistical Service.

According to figures announced today by the Statistical Service and Eurostat, the GDP adjusted for seasonal fluctuations and working days grew by 2.7% YoY in the fourth quarter of 2015 against a 2.3% annual growth in the third quarter of 2015. 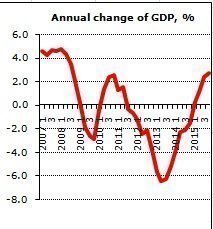 According to the Statistical Service, the increase of the GDP growth rates is mainly attributed to the sectors of hotels and restaurants, professional, scientific and technical activities, retail and wholesale trade, manufacturing,construction, transport as well as the financial service activities. 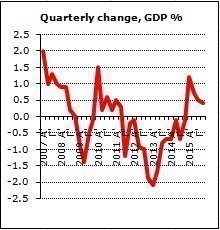 Cyrpus’ creditors expect that economic growth in 2015 will stand at 1.5%.

Greece's GDP recorded a contraction of 1.9% as in the previous quarter.

In a written statement, the minister of finance Harris Georgiades notes that "it is confirmed today that the Cypriot economy is on the road to recovery”.

“Forecasts of those permanently disagreeing are once again denied. Now the conditions for creating new jobs and new opportunities in our economy emerge” he said.

However, the minister also stressed that there is a key condition that is the commitment to the reforms policy and prudent management of public finances. “We have to stay away from irresponsible practices of the past that led our economy to the brink of total collapse" he indicated.
Previous
Next