Cyprus achieved larger than expected spending cuts, with consequent positive deviation of 2.4% of GDP or €385 million compared to its initial fiscal targets agreed with the creditors.

The great improvement in public finances is registered in the new documents of the Finance Ministry, which show that the fiscal improvement is far beyond the expected. 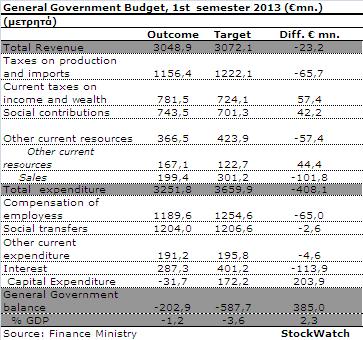 Public expenditure suffered greater reduction than expected at €408,1 million, although partly for methodological reasons and because of a delay in payment of compensation for expropriation.

Wages decreased by €65,7 million more than forecasts at €1,189.6 million, compared with forecasts of €1,254.6 million. The deviation is mainly due to the higher efficiency of the reduction of salaries and wages, despite the acceleration of early retirement.

Social transfers decreased to €1,204.0 million compared with forecasts of €1,206.6 million. The deviation is mainly attributable to greater efficiency in the targeting of social welfare combined with an increase in unemployment spending and redundancy payments associated with developments in the labour market.

The other current expense decreased to €191,2 million against estimates of €195,8 million.

Total capital expenditure was negative by €31,7 million compared to a forecast of €172,2 million. The deviation is mainly due to methodological treatment of the signature rights for the exploration of hydrocarbon deposits together with a delay in the payment of obligations of annexation of land.

Taxes on production and imports amounted to €1,156.4 million, showing a decline of €65,7 million against a target of €1,222.1 million. The deviation is attributable to the better than expected performance in the VAT rate from January 2013.

The contributions of social insurance funds reached €743,5 million compared to the government target of €701,3 million. The deviation is linked to the fact that the employment levels in the economy did not show significant reductions in the first half of the year.

Other current revenue amounted to €366,5 million compared to forecasts of €423,9 showing deficit of €57,4 million.

The deviation is mainly due to methodological classification of the signature rights for the exploration of hydrocarbon deposits together with the higher than expected revenue from dividends from the Central Bank of Cyprus.
Previous
Next