As part of the economic adjustment program, Cyprus borrowed money from official creditors with low interest rates and long maturities. This has helped limit the immediate borrowing needs of the country to about €2 billion until the end of 2018.

The debt management office aims to have a liquidity buffer of €1 billion to deal with abrupt changes in bond markets. 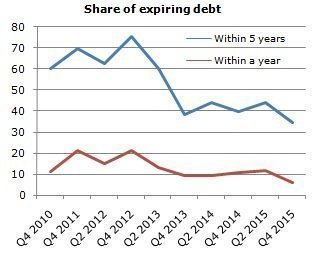 The one downside of the debt profile is the high percentage of debt with floating rates. Although Cyprus benefits from a low interest environment and cheap official lending, an increase in interest rates will have an effect on its capacity to service its debt.

As regards loans at floating rate, most (72%) relate to ESM loans.

With regards to currency composition 95% of the debt is in euro and only 5% in foreign currencies.

Most of the debt is related to loans from official sources (65%), followed by foreign bonds (18%) and domestic bonds (10%).
Previous
Next