The fiscal balance of Cyprus deteriorated in the first two months of 2016, despite the reduction of expenditure and the rise on central government revenues. 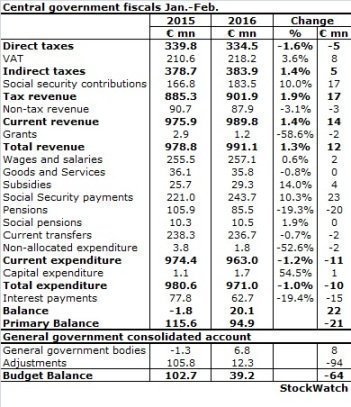 The Cyprus budget typically presents a surplus in the first nine or ten months of the year.

The primary balance, which does not include the cost of servicing the public debt, dropped to €94,9 mn from €115,6 mn in January-February 2015.

The surplus refers to the general government’s consolidated account.

Excluding adjustments and other general government bodies a deficit of €1,8 mn is recorded against a surplus of €20,1 mn last year.

Last year’s accounts benefited from nearly €200 mln in unspecified adjustments made by the government.
Previous
Next