The general government's primary balance achieved in 2015 exceeded the targets set in the latest review of the economic adjustment program by €57 mn. 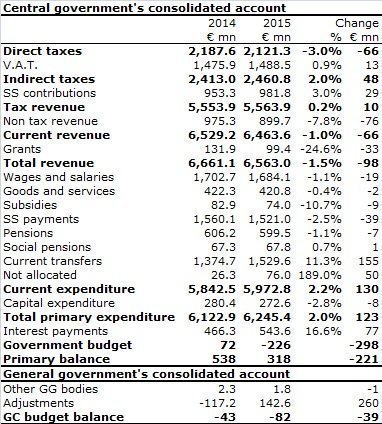 The return of Cyprus to a recovery path is not accompanied by a respective improvement of public finances, as there was a light deterioration of revenues and a small increase in expenditures.

According to new data by Cystat, the fiscal deficit for the general government in 2015 amounted to €82 mn against a deficit of €43 mn in 2014.

In the first eleven months of 2015 there was a fiscal surplus of €2 mn.

Direct taxes fell by €66 mn while indirect taxes increased by €41 mn while social security contributions were up by €29 mn.

Non-tax revenues decreased by €76 mn mainly due to the lower central bank dividend, bringing the current revenues to €6,46 bn, €66 mn less than in 2014.

Due to a decline of €33 mn in grants the total change in overall revenues of the central government reached -€98 mn.

The Cystat data show a small increase in public spending mostly due to current transfers.

On the contrary, the biggest decreases were evidenced in social security payments and wages and salaries as they declined by €39 mn and €19 mn respectively.

As a result, the primary surplus – the surplus without the cost of debt service - of the central government reached €318 mn compared to €538 mn in 2014 while the overall balance stood at -€226 mn compared to €72 mn.

After considering a surplus from local authorities and semi-public entities as well as from technical adjustments, the overall balance for the general government stood at -€82 mn.

There was a surplus of €2 mn from local authorities and semi-public entities slightly lower than in 2014.

Cash flow adjustments as per the EU methodology reached €143 mn compared to a deficit of 117 mn in the previous year. The figures given do not explain the adjustments made.

The resulting balance of the general government reached -€82 mn compared to -€43 mn in 2014.
Previous
Next