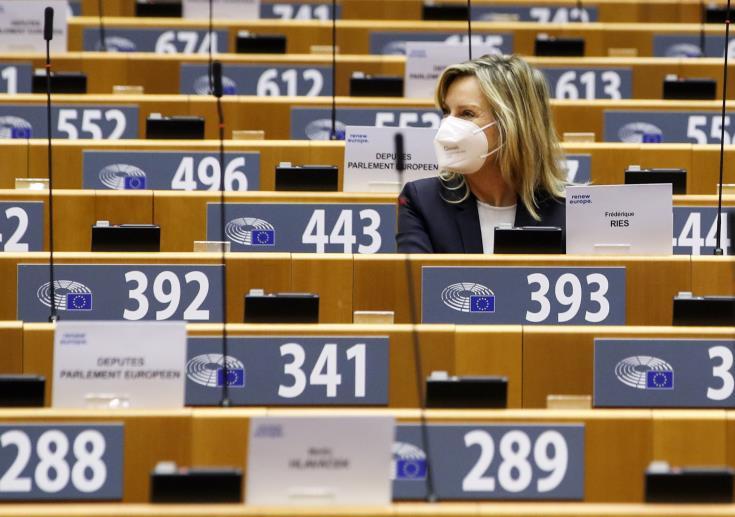 European Parliament adopted with 631 in favor, 3 against and 59 abstentions a non-binding resolution "on the escalation of tensions in Varosha following Turkey`s illegal actions and the urgent need to resume talks", after the earlier inclusion of three amendments, two by ECR (European Conservatives and Reformists) and one by the EPP (European People`s Party).

The resolution "condemns Turkey`s illegal activities at Varosha", calls on the Turkish government "to reverse this decision and avoid unilateral action", calls on the European Council "to maintain its unified position against its unilateral and illegal actions" and "to take action and impose severe sanctions in response to Turkey`s illegal actions ", while recalling that further sanctions "can only be avoided through dialogue, sincere cooperation and concrete progress on the ground" and calls for the resumption of talks for the reunification of Cyprus under the auspices of the Secretary-General of the United Nations.

More specifically the EP resolution condemns Turkey’s illegal activities in Varosha, in particular its partial ‘opening’; emphasises that the creation of a new fait accompli undermines mutual trust and the prospects for a comprehensive solution of the Cyprus problem, by negatively modifying the situation on the ground, exacerbating division and embedding the permanent partition of Cyprus; warns against any change of the status quo in Varosha in violation of the aforementioned UNSC resolutions.

Urges the Government of Turkey to reverse that decision, and avoid any unilateral action that could raise further tensions on the island, in compliance with the recent call of the UNSC; calls on Turkey to withdraw its troops from Cyprus, to transfer the Varosha area to its lawful inhabitants under the temporary administration of the UN in accordance with UNSC Resolution 550 (1984), and to refrain from any actions altering the demographic balance on the island through a policy of illegal settlements; stresses the need for the EU acquis to be implemented across the entire island, following the solution of the Cyprus problem.

The EP says it is firmly convinced that sustainable conflict resolution can only be found through dialogue, diplomacy, and negotiations in a spirit of good will and in line with international law and reaffirms its belief that a sustainable solution of the Cyprus problem would benefit every country in the region, primarily Cyprus, Greece and Turkey; calls on the European Council to maintain its unified position visà-vis unilateral and illegal actions by Turkey, to take action and impose tough sanctions in response to Turkey’s illegal actions; recalls that further sanctions can only be avoided through dialogue, sincere cooperation and concrete progress on the ground.

Furthermore, it reiterates its support for a fair, comprehensive and viable settlement on the basis of a bi-communal, bi-zonal federation with a single international legal personality, single sovereignty and single citizenship, and with political equality between the two communities, as defined by the relevant UNSC resolutions, in accordance with international law and the EU acquis, and on the basis of respect for the principles on which the Union is founded.

The EP expresses its concern that the illegal ‘opening’ of Varosha aims at changing the status of property ownership in the area, thereby undermining the prospects for the return of Varosha as prescribed by the relevant UNSC resolutions, or through the comprehensive solution of the Cyprus problem; urges Turkey to refrain from illegally settling Varosha with people other than its lawful inhabitants or calling for the lawful inhabitants to return to their properties under conditions of military occupation.

It also stresses that direct talks under the auspices of the UN on the agreed basis remain the only option for reaching a solution that reunites the island and its people, leading, inter alia, to the normalisation of relations between Cyprus and Turkey, improved prospects for the delimitation of the Exclusive Economic Zone between Cyprus and Turkey, and the enhancement of EU-Turkey relations; urges that the negotiations on the reunification of Cyprus under the auspices of the UN Secretary-General be relaunched on the agreed basis as soon as possible.

The EP stands by both the Turkish and the Greek Cypriot communities in their quest for peace and stability and calls on the Commission to promptly implement the second Annual Action Programme for aid to the Turkish Cypriot community, aimed at supporting projects that foster reconciliation and improve infrastructure, environmental protection and economic development; calls, in particular, for continued and increased support for civil society in both the Turkish and the Greek Cypriot communities, both through the EU Aid Programme and more structurally as part of the new multiannual financial framework, in particular through the Citizens, Equality, Rights and Values Programme.

Moreover, it calls for the EU and its Member States to play a more active role in bringing negotiations under UN auspices to a successful conclusion, including by appointing a representative to the UN good offices mission, and to coordinate their efforts with the European Parliament to convince Turkey to reverse its illegal activities in Varosha.

The resolution also underlines its support for the territorial integrity of Cyprus and calls for the EU Member States to oppose any attempts by third countries to recognise a state on the island of Cyprus other than the Republic of Cyprus.

It deplores the statements by the President of Turkey during his visit to Varosha on 15 November 2020, which flagrantly revealed Ankara’s ‘road map’ for the illegal settlement of the sealed-off city and his support for the permanent partition of Cyprus.

The EP calls on Turkey to refrain from proceeding with any unilateral activities, such as illegal exploratory drilling, which further violate the sovereignty and sovereign rights of the Republic of Cyprus, threaten to create new faits accomplis in violation of the Law of the Sea, undermine the resumption of substantial negotiations and the prospects for a comprehensive solution on the agreed basis, and are not conducive to good neighbourly relations in the region.

The EP resolution calls on the UN mission in Cyprus to step up efforts to monitor developments in Varosha and instructs its President to forward this resolution to the Council, the Commission, the Vice-President of the Commission / High Representative of the Union for Foreign Affairs and Security Policy, and the President, Government and Parliament of Turkey.