Greece and Cyprus in full coordination to address Turkish actions 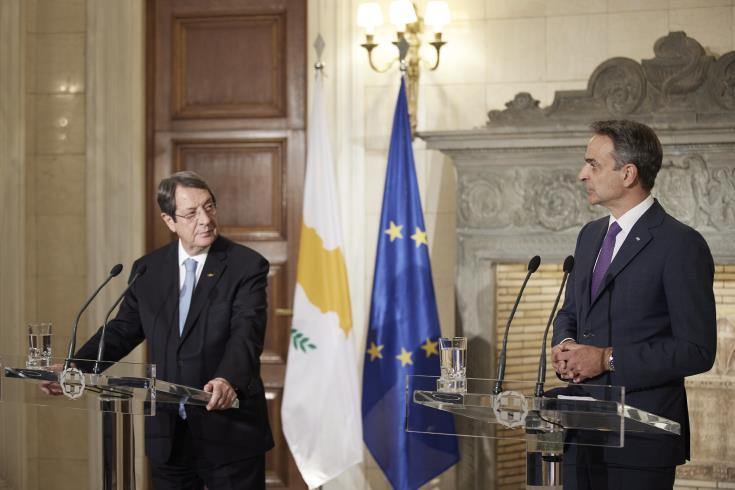 President of the Republic of Cyprus Nicos Anastasiades and Greek Prime Minister Kyriakos Mitsotakis said that Nicosia and Athens are in full coordination to address the illegal Turkish actions in Varosha.

During their joint statements after their meeting in Athens, on Tuesday, Anastasiades and Mitsotakis also reiterated both Greece’s and Cyprus’ readiness to participate in a resumption of negotiations on the Cyprus Problem, within the framework of the UN resolutions and the terms of the UN Secretary-General`s mandate.

President of the Republic of Cyprus said that the two countries’ response to Turkey`s efforts for the change of status in the fenced-off city of Varosha was at the center of his meeting with the Greek Prime Minister.

According to President Anastasiades, the two leaders agreed that in addition to the strong statement of the UN Security Council Presidency on July 23, EU High Representative's strong statement today was particularly important.

He also stressed that Turkey’s claims to change the negotiation basis of the Cyprus Problem are “completely opposed to the UN resolutions and outside the terms of the Secretary-General`s mandate".

"It is inconceivable for anyone to expect that the Greek Cypriot side will accept the creation of an independent state on the island –a form of state that will be fully controlled by Turkey and in which no rights of the Greek Cypriots will be recognised", he said. As he suggested, this prospect will not be accepted either by the EU or the UN.

Both the Greek Cypriot and the Greek side will intensify their efforts to create the conditions that will allow the UN Secretary General to convene a new summit on the Cyprus Problem, with the aim of a meaningful and creative dialogue that could lead to a viable solution to the Cyprus problem, beyond any dependencies and occupation troops, Anastasiades said.

"There is no question of accepting Turkey`s preconditions and the two-state solution. I reiterate my determination, readiness and political will to engage in a dialogue that will resume from where it was left off in Crans-Montana. Turkish obstinacy led to the failure of Crans-Montana. We seek to resume the dialogue. The common ground is the UN resolutions", he added.

President of the Republic of Cyprus also stressed that as a result of the coordination and joint actions of Nicosia and Athens, a strong condemnation of Turkish actions has been achieved.

On his part, Greek Prime Minister Kyriakos Mitsotakis sent a clear message to Turkey regarding its moves in Cyprus and the Aegean. "Every inch of Greek territory, continental or insular, and every Greek citizen has the same inalienable, inviolable right to security and defence," he said, adding that Greece will never give up its right to self-defence, which is recognised by the UN Charter.

Mitsotakis referred to Turkey’s new illegal actions in Varosha, noting that they violate the Security Council resolutions and undermine the efforts for the resumption of negotiations on the Cyprus problem. EU and the member states condemned as a whole these actions, but “Turkey not only rejected the Security Council’s statement but also blamed the global condemnation of its illegal actions on the alleged propaganda of Greece and Cyprus", Kyriakos Mitsotakis noted.

Greek Prime Minister reiterated that Athens supports the efforts of the Republic of Cyprus to reverse the Turkish actions in Varosha and the resumption of negotiations on the Cyprus problem. "We have stated that Turkish claims for recognition of equal status and sovereign equality of the illegal secessionist entity in the occupied areas of Cyprus, as well as the solution of two separate states, are unacceptable. They are contrary to international law and we reject them in principle," he said.

At the same time, Mitsotakis accused Turkey of a "heavily revisionist and aggressive logic", on the basis of which it accuses Greece for the protection of its islands. "The provocative letter to the United Nations has been answered," he said. "Turkey which invaded and occupies 38% of the Republic of Cyprus, Turkey which has declared a casus belli against Greece, claims that its security is endangered by our country`s self-protection measures", Mitsotakis noted.