Lute expected to return to the island in "near future" 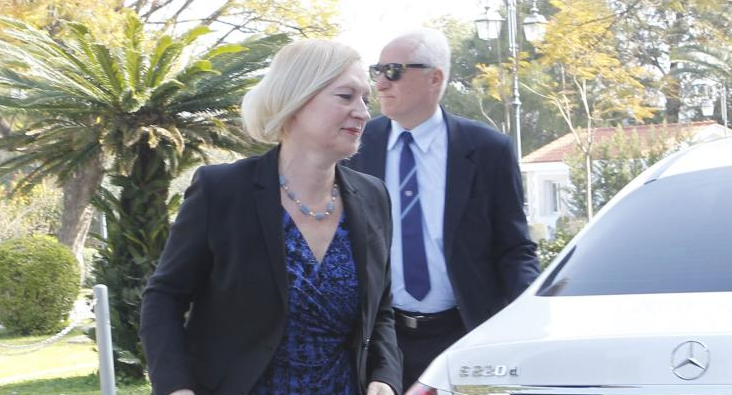 UN Secretary General’s Special Representative in Cyprus and head of UNFICYP Elizabeth Spehar has said that UNSG's envoy for Cyprus Jane Holl Lute is expected to return to the island in "the near future."

Spehar, who was speaking during a press briefing after having presented the UN Secretary General’s most recent report on UNFICYP to the Security Council and on developments in Cyprus since his last report, also said, inter alia, that Security Council members were "very clear about their appreciation of the role of both the Good Offices and UNFICYP.”

She added that “there was a very good exchange of views, a number of very pertinent comments from the Council members, and a lot of very important questions that they were asking me as well.”

Spehar continued saying that she “confirmed to them as the Secretary-General said in his report that, over the last year and in the last six months in particular, there have not too many positive developments on the island.”

We know, she pointed out, “that we have not have talks for more than a year and a half; however, I also highlighted the positive developments that we had in the last six month period.”

To that extent she referred to the fact that the leaders met again for a second time in 2018, on the 26th of October and they agreed on the opening of two new crossing points and that those crossing points did indeed opened on the 12th of November.

“I also underscored as a positive point the fact that Jane Holl Lute, continues her consultations with the parties and that in the period of 14-18 December she had two rounds of discussions with the leaders on the island,” she said.

Spehar noted that she “thanked the Security Council for its continuous support, both for the peace efforts in Cyprus, as well as the two peace missions on the island and the efforts of Lute to support the sides towards arriving at mutually agreed terms of reference as a common starting point for renewal of negotiations.”

“I believe also that from our exchanges this afternoon, the Security Council very much appreciates the views of the Secretary-General with respect to the need to improve the climate and the atmosphere on the island, and to have better conditions for a renewed successful negotiation process, so they were very supportive of additional confidence building measures and more trust building between the communities on the island, and having more direct support for that on the part of both sides, including the leaders,” she said.

Finally, Spehar added, “I believe that they also were very clear about their appreciation of the role of both the Good Offices and UNFICYP.”

“In the case of UNFICYP, they understood and underscored the importance of our two prompt approaches to creating conditions conducive to a successful negotiation process on the island,” she said, adding that “on the one hand continuing to maintain common stability in and around the buffer zone and in the second instance in helping to bring the communities together and promoting greater conduct, cooperation, and trust building between the two communities.”

The UN official was also called on to comment on statements by the so called “minister of foreign affairs” Turkish Cypriot politician Kudret Ozersay about making UNFICYP a more civilian structure.

“I can simply say that the role of UNFICYP on the ground is not simply to monitor, it’s also actively to diffuse tensions in and around the buffer zone,” she stresses.

So, Spehar continued, “as we know we have about 1,000 soldiers laid on both ceasefire lines, and they are occasionally tensions that arise because of incidents.”

“Sometimes arising from civilian activity and what UNFICYP does is not only monitor these events but we also have liaison and engagement military, and we have our UN police who actively diffuse these incidents so that they don’t further escalate,” she pointed out adding that “in terms of the role of our military is very important because, military-to-military contact is important when you try to address these types of issues.”

Replying to another question she said that as she understands it the Security Council is planning “on finalizing the resolution in the next couple of days.”

Asked whether she knows for how long UNFICYP’s mandate will be renewed she noted that “the Council usually looks at the renewal issue in six-month increments because our mandate must be renewed twice a year as you know.”

The Republic of Cyprus has been divided since 1974, when Turkish troops invaded and occupied 37% of its territory. Repeated rounds of UN-led peace talks have so far failed to yield results. The last round of negotiations, in July 2017, collapsed at the Swiss resort of Crans-Montana.