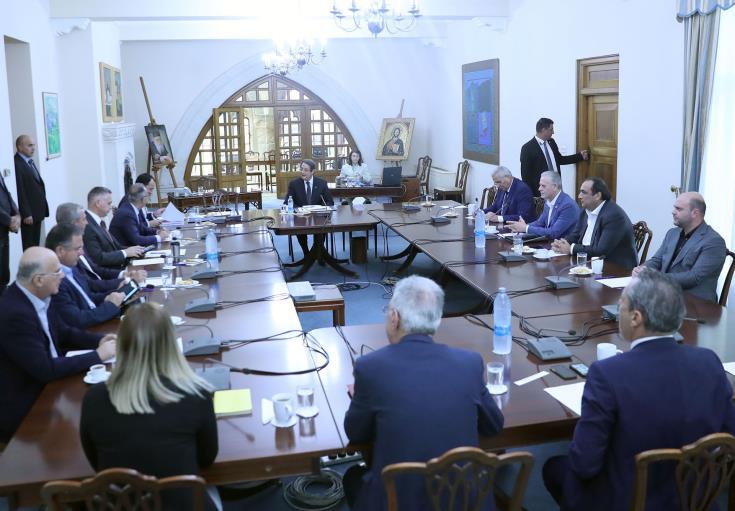 The National Council, Cyprus’ top advisory body which is comprised of parliamentary political party leaders, was informed on Wednesday by President Nicos Anastasiades on recent developments as regards the Cyprus problem, ahead of a meeting in Berlin, on November 25, between himself, UN Secretary General Antonio Guterres and Turkish Cypriot leader Mustafa Akinci in a bid to reach agreement on the terms of reference which will pave the way for the resumption of Cyprus reunification talks.

In statements after the meeting, Government Spokesman Prodromos Prodromou reiterated that President Anastasiades will be going to the meeting with goodwill and a clear political will, to reach agreement on the steps forward and expressed the hope that the meeting will take place in a spirit of constructive cooperation so that negotiations can resume as soon as possible.

He said the President had briefed political leaders about “all the developments, all the preparations ahead of the meeting he will have with the Secretary General and the Turkish Cypriot leader on the 25th of this month.”

In particular, he added, political party leaders were briefed on a memo submitted by President Anastasiades to the UN Secretariat, following a request by the UN Security Council that it will be submitted together with the Secretary General’s Report on his Good Offices Mission.

He also briefed the members of the National Council about all the contacts taking place with the United Nations and all the information relating to the continuation of negotiations on the Cyprus problem, the Spokesman noted.

“What is important”, Prodromou stressed, “is that President Anastasiades, will go to the meeting in Berlin with the Secretary General with goodwill and with a clear political will to discuss and agree the next steps.”

“Our side, considers that the terms of reference can be agreed based on the understanding which took place on August 9 with the Turkish Cypriot leader, on the basis of the three pillars which are well known,” he said.

“We could have the terms of reference now just as the Secretary General has asked and also an informal meeting of the parties who took part in the conference in Crans Montana could also be convened as has been proposed so that the procedures for the resumption of negotiations as soon as possible can be agreed on,” the Government Spokesman noted.

This is the position of the Cyprus President, he added, expressing the hope that “there will be constructive cooperation in the meeting in Berlin so that negotiations can resume as soon as possible.”

Prodromou also said that political leaders were briefed by Minister of Foreign Affairs Nikos Christodoulides on the decisions of the EU Foreign Affairs Council on Monday on the legal framework for restrictive measures in response to Turkey`s illegal actions and violations in Cyprus’
Exclusive Economic Zone (EEZ).

Asked about a teleconference between UN Secretary General’s special envoy Jane Holl Lute and Greek Cypriot and Turkish Cypriot negotiators, the Government Spokesman did not wish to give any details, in view of the Berlin meeting but said that political party leaders have been briefed.

“What is clear is that the President of the Republic has conveyed to the United Nations via our Permanent Representative that our side is ready to reach agreement on the terms of reference, based precisely on the understanding in place, without any pre-decisions which will prejudice the course of the negotiations, because the objective goal is for the negotiations to resume,” he added.

Asked about a brief conversation President Anastasiades had on Tuesday with Guterres, Prodromou said that “President Anastasiades had the opportunity yesterday to have a very short conversation with the Secretary General, during which they concluded that they are looking forward to discuss matters during the meeting they will have on November 25.”

Replying to another question he said that during the National Council meeting political party leaders were also briefed on consultations the government is holding with European Commission on the application for the Cypriot cheese halloumi to become a protected designation of origin.

“Consultations are ongoing, there are certain technical issues and we hope that it will soon be able to have final approval,” he noted.

Replying to a question as to whether the obstacles are political, he said “they are technical issues” which in the case of Cyprus and because of the Turkish occupation “certainly have a political nuance and political ramifications.”

“However”, he pointed out, “for the Republic of Cyprus things are clear”, adding that consultations are ongoing and “we hope that solutions can be found on the basis of what has been put in place in the past as regards the temporary status of the Turkish occupation so that Cyprus as a whole, since this also concerns Turkish Cypriots living in the occupied areas, can safeguard this, by all accounts, Cypriot product and it can be traded internationally with safety”.

Repeated rounds of UN-led peace talks have so far failed to yield results. The last round of negotiations, in the summer of 2017, at the Swiss resort of Crans-Montana ended inconclusively.

In mid-November, the UN Secretary General’s Special Envoy for Cyprus, Jane Holl Lute will be in Cyprus to prepare for the meeting of the leaders with Guterres, in Berlin.