President Anastasiades aims at a creative meeting with Akinci 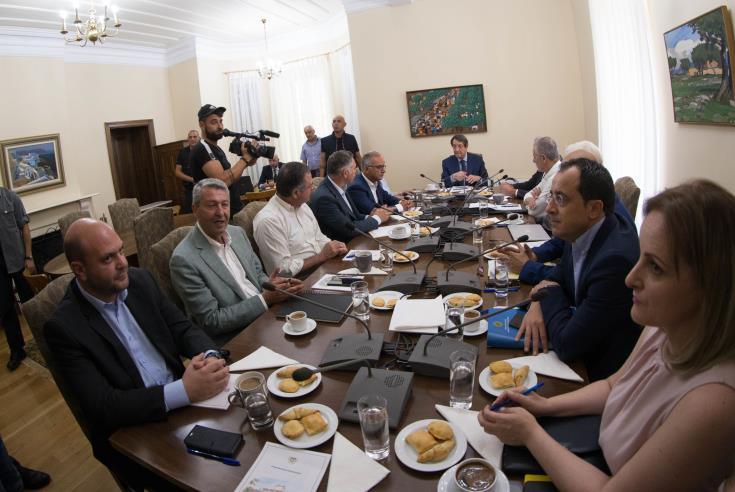 The President of Cyprus Nicos Anastasiades aims at a creative meeting with Turkish Cypriot leader Mustafa Akinci, on Friday, in a bid to create the necessary conditions for the resumption of settlement talks, Prodromos Prodromou said on Monday.

He was speaking after a session of the National Council, that was held at the presidential summer residence in the Troodos mountains and lasted for about 3 hours.

Prodromou also said that after the meeting with Akinci, President Anastasiades will convene the National Council anew and brief its members.

Speaking after the session, Prodromou said that the President informed today the members of the National Council about his approach vis-à-vis the August 9 meeting, as well as about his intention to create the necessary conditions for the resumption of negotiations and for a Cyprus settlement.

He also said that the members of the National Council submitted their positions and views, which the President of the Republic will evaluate and take into consideration.

The Government Spokesman said that the Greek Cypriot side aims consistently at a Cyprus settlement and at the resumption of settlement talks since July 2017. Therefore, Prodromou continued, while taking into consideration the position of all political parties, the President proceeds to take part in all procedures aiming exactly at the resumption of talks, on the basis of UN resolutions and the parameters set by the Secretary General at the last round of talks in the Swiss resort of Crans Montana.

Asked if they will discuss about a moratorium of activities in Cyprus’ exclusive economic zone this Friday, Prodromou said it would be nor useful, neither responsible to prejudice the discussion.

As for the position of the President with regard to natural gas and Varosha, the fenced-off part of Famagusta, Prodromou said that “the positions of our side are known.”

Asked if there is a minimum understanding, Prodromou said that it is not the time to make statements. “We remain focused in the President’s pursuit for a creative meeting with the Turkish Cypriot leader in a bid to create in general the necessary conditions for the resumption of negotiations” Prodromou concluded.

The Republic of Cyprus has been divided since 1974, when Turkish troops invaded and occupied its northern third. Turkey has ignored numerous UN resolutions calling for the withdrawal of the Turkish troops and respect of the integrity and sovereignty of the Republic of Cyprus. Repeated rounds of UN-led peace talks have so far failed to yield results. The last round of negotiations, in the summer of 2017, at the Swiss resort of Crans-Montana ended inconclusively.

18/09
Louis: Board meeting on 29/9 for six-month results 2020
16/09
CSE: Listing of additional shares of Minerva
15/09
Interfund: The payment of the exercise amounts of the rights can also be made through the Cyprus Development Bank
15/09
Hellenic Bank 2019 sustainability report
16/09
Petrolia: Private placement in Petrolia Noco AS