Home » News » President: We will not allow again disruption of constitutional order in Cyprus

President: We will not allow again disruption of constitutional order in Cyprus 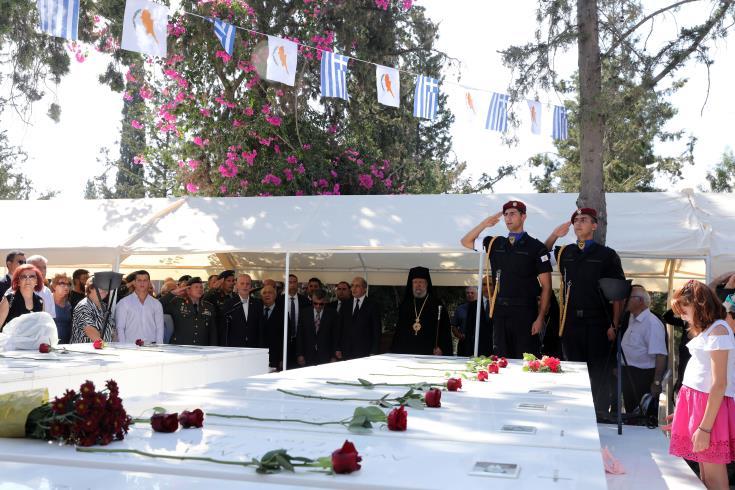 Today, with the certainty that there is a solid democracy in our country, we will not allow again, in any way and with any justification, the disruption of the constitutional order in Cyprus, President of the Republic Nicos Anastasiades says in a written statement on the completion of 45 years since the coup d`etat against Cyprus in 1974.

According to the Presidency, in his written statement, the President states that today marks 45 years since the coup d` etat against the legitimate President of the Republic of Cyprus, Archbishop Makarios III, adding that Turkey has used the coup d` etat as a pretext to implement its long plans and that since then it continues to violate international law and questions the sovereignty of the Republic of Cyprus.

Today`s sad anniversary, he notes, constitutes an opportunity for reflection, adding that today, with the certainty that there is a solid democracy in our country, we will not allow again, in any way and with any justification, the disruption of the constitutional order in Cyprus.

Sirens sounded at 0820 local time (0520 GMT) to remind people of the time the coup d`etat unfolded.

The President, in his written statement says that the sirens that sounded today remind us of the tragedy and the price of the traitorous act.

The President goes on to say that the sirens that sounded this morning remind us of the duty that we have today, namely that the leadership and the people of Cyprus, united, have to address the continuous Turkish occupation and the new aggressive actions, in order to consolidate the freedom in our homeland and its liberation from the Turkish occupation.

Our duty to the next generations is for all of us to contribute so that we finally bring peace and prosperity to our homeland, he concludes.

On 15 July 1974, the Greek military junta and its Greek Cypriot collaborators carried out a coup against the democratically elected President of Cyprus.

The coup provided Turkey with a pretext to launch an invasion against the defenceless island, which is only 75 kilometres south of Turkey. In a two-phase military intervention in July and August, and despite calls from the UN Security Council [Resolution 353 (1974)] for the quick restoration of constitutional order on the island, Turkish troops advanced and occupied 36,2 percent of the sovereign territory of the Republic and forcibly expelled about 200.000 Greek Cypriots from their homes. Another 20.000 Greek Cypriots, who remained in the occupied areas, were also forced to eventually abandon their homes and seek refuge in the safety of the government controlled areas. Today, fewer than 500 enclaved Greek Cypriots remain in the occupied areas.

The pretext Ankara used to justify its military invasion was that it had to offer security to the Turkish Cypriot population on the island, which made up 18 per cent of the total population.