Home » News » Consultations to conclude the terms of reference continue 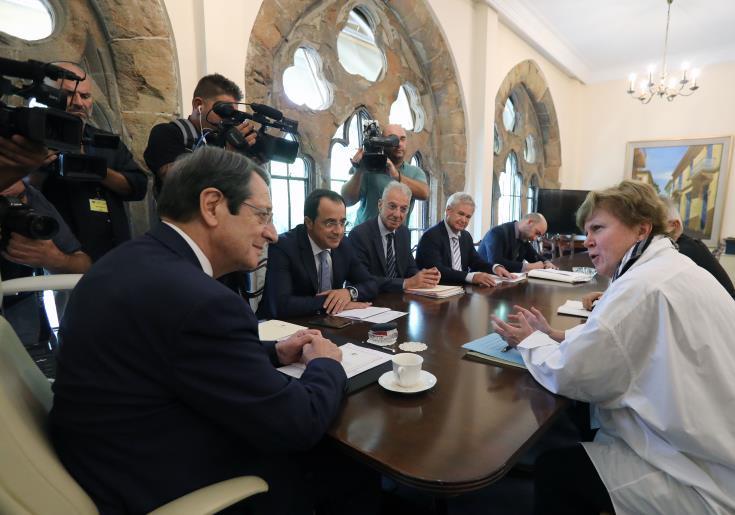 “We have started the effort to formulate the terms of reference and we intend to finish this off,” Government Spokesman Prodromos Prodromou said on Thursday.

Speaking at the Presidential Palace, after a meeting between the President of Cyprus, Nicos Anastasiades, and UN envoy, Jane Holl Lute, which lasted about 1,5 hours, the Spokesman said that there has been a small impediment, but negotiations to formulate the terms of reference continue.

He did not preclude a new meeting with Lute on Friday, he said however that this has not been finalized yet.

“The President of the Republic Nicos Anastasiades had today one more meeting with the Special Adviser of the UN Secretary-General, Jane Holl Lute. Consultations continue, the effort to reach our target continues,” Prodromou said.

Asked about reports in the Turkish Cypriot press, that the Greek Cypriot side presented a “radical proposal” regarding the terms of reference, Prodromou replied that there is no need to comment on reports. “The effort is ongoing, and we must wait. What I can reiterate is that the President is determined and that he has the necessary good will to conclude the terms of reference and resume negotiations, in line with the Secretary-General’s call.”

Asked if any proposal was submitted in order to facilitate this effort, Prodromou reiterated that “consultations are ongoing.”

The Government Spokesman also said that during an informal meeting, on August 9, the two leaders reached a common understanding “and this is the reason why Lute is here.”

“As the President said, there has been an issue, a small obstacle, but negotiations continue” he added.

Asked what the issue was about, Prodromou said that “it is not appropriate, nor will we comment on anything, when negotiations are underway.”

He was also asked if the Turkish side tries to incorporate any points in the terms, instead of negotiating them later at the table, with Prodromou replying that it was self-evident that the terms of reference comprise a starting point for negotiations and a point of reference. This is simple, at the same time, however, this can also be the subject of consultations, he remarked.

On another question, whether there is any indication about the stance of the guarantor powers, Prodromou said that the President of Cyprus is cooperating with Lute, who is also in consultation with the Turkish Cypriot leader. “This is what is now happening, and this effort will continue” he said.

Asked finally if Turkey is putting forth any obstacles, the Government Spokesman replied that the current effort is to reach an understanding with Lute on the terms of reference in order for the UN Secretary-General to be able to start the process for the resumption of settlement talks.

Cyprus has been divided since 1974, when Turkey invaded and occupied its northern third. Repeated rounds of UN-led peace talks have so far failed to yield results. The latest round of negotiations, in the summer of 2017 at the Swiss resort of Crans-Montana ended inconclusively.