Cyprus protests Turkish provocations in its EEZ to UNSG 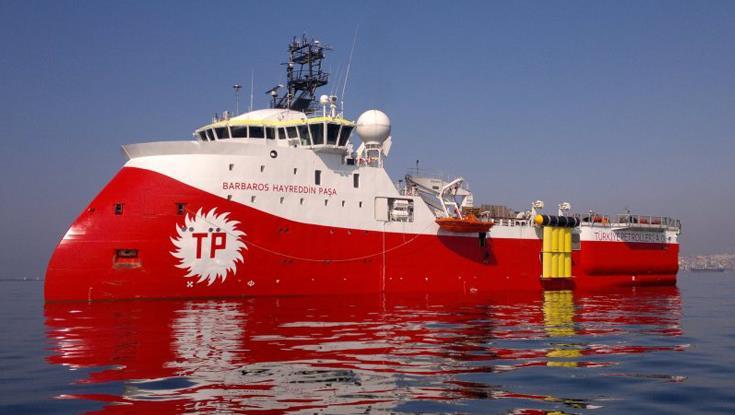 The Republic of Cyprus has protested Turkey’s provocative actions within its Exclusive Economic Zone, last October, to the UN Secretary General Antonio Guterres.

In particular, in a letter dated December 12, which was circulated on December 31, 2018, as an official document of the UN General Assembly, Cyprus’ Permanent Representative to the UN Kornelios Korneliou focuses on the illegal activities of the research vessel “Barbaros”.

“On 18 October 2018, the Turkish State-owned survey vessel Barbaros Hayreddin Paşa and supporting vessels, accompanied and supported by Turkish warships, commenced seismic surveys in the southwest areas of the continental shelf/EEZ of Cyprus, including within parts of hydrocarbon exploration blocks 4 and 5,” Korneliou said.

“The area has purportedly been reserved for seismic surveys by Turkey, via an unauthorized navigational warning dated 16 October, for the period from 18 October 2018 to 1 February 2019,” he noted.

These surveys, he pointed out, “constitute a violation by Turkey of the sovereign rights of Cyprus under international law and, in particular, the 1982 United Nations Convention on the Law of the Sea (UNCLOS), the relevant provisions of which have long been crystallized into customary international law.”

“Turkey has no legal standing whatsoever to conduct exploration activities with respect to the natural resources of the island without the express consent of the Government of the Republic of Cyprus,” Korneliou noted.

He further said that all seismic data collected by Turkey during those illegal and unauthorized surveys belong to the Republic of Cyprus.

According to the Permanent Representative, "the activity of the Turkish warships in the aforementioned area constitutes an abuse of the rights vested in all States by customary international law, which is also reflected in UNCLOS, and runs contrary to the rule of peaceful uses of the seas.”

“The behaviour of Turkey has the effect of increasing tensions, putting at risk the peace and security of the region,” he added.

He reiterated the position of Cyprus regarding its rights to maritime zones, noting that “the Republic of Cyprus declared an EEZ in 2004 and has inherent rights over the continental shelf of the island of Cyprus, the outer limits of both zones being the median line with the opposite States, pending agreement to the contrary. In this regard, the Republic of Cyprus has signed EEZ delimitation
agreements with Egypt, Lebanon and Israel, on the basis of the median line.”

In this respect, he noted Cypriot Foreign Minister Nikos Christodoulides’ recent public statements during which he “invited Turkey to enter into negotiations with Cyprus with a view to reaching an agreement on the delimitation of our respective maritime zones.”

“Cyprus holds the view that the two States should engage in meaningful negotiations conducted in good faith so as to reach an agreement, as prescribed by international law, contributing, thus, to the establishment of a stable and secure environment in the eastern Mediterranean,” Korneliou said in the letter.

He repeated the Cypriot Government ’s “invitation to Turkey to delimit our respective maritime zones, in accordance with international law.” 05/06
Paralimni Marina set to launch this summer
04/06
Fiscal Council: Public funds should be distributed with caution
04/06
Cyprus among the safe destinations for German tourists
04/06
May inflation down by 1.5%
04/06
Cyprus needs to remain successful in controlling COVID-19