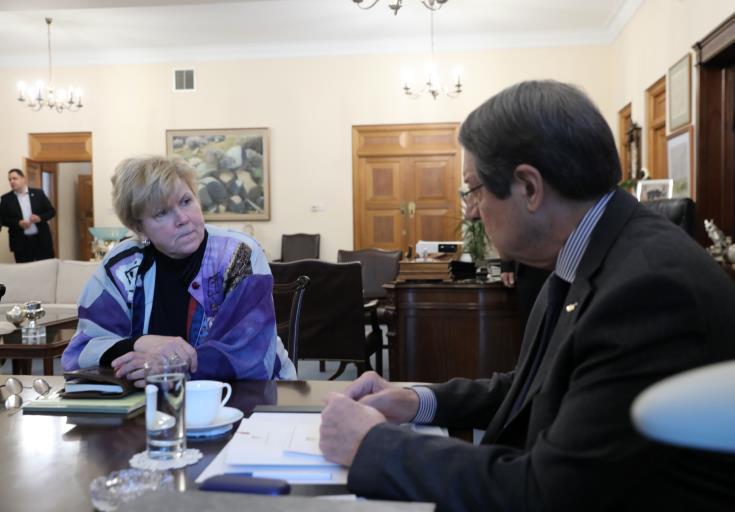 Government Spokesman Prodromos Prodromos said Monday that Special Envoy of the UN Secretary General Jane Hall Lute, conveyed to the President of the Republic Nicos Anastasides an unbalanced proposal for a four-party conference, which as he said “obviously must have been made by the Turkish side”.
"It is well known that in the past there was this idea (of a four-party conference) which, of course, is not balanced. The balance of the sides is not ensured by a meeting between the two guarantors and both communities in Cyprus, " said Prodromou, speaking after a meeting between President Anastasiades and heads of parliamentary parties.

What it would be helpful, as he pointed out, would be a meeting of the two leaders in Cyprus with Mrs. Lute, in order to clarify some issues.

During the meeting on Monday, President Anastasiades briefed political leaders on his last meeting with UN special envoy Special Envoy and the efforts made for an agreement on the terms of reference for a resumption of the Cyprus talks.

"In particular, the President pointed out that, for his part, he made every effort in a positive way, proposing to Mrs Lute that it would be constructive to have a position on the parameters that the Secretary General had tabled, which would not be binding but subject to a final decision " said the Spokesman.

He added that if there were similar positions on part of the Turkish Cypriot side, Mrs Lute`s process and mission would be facilitated, and if there was a joint meeting of the two leaders with Mrs Lute the communication could be more immediate and more productive.

Saying that in view of the fact that the Turkish side refers only to the parameter of participation and political equality of the Turkish Cypriots, the President stressed to Mrs Lute that the terms of reference must concern all the six parameters with which Antonio Guterres wanted to assist the process in Crans – Montana.
Prodromou also said that in view of the Turkish claim for an ever-widening concept of political equality, the President referred to an earlier proposal he had tabled, the concept of a parliamentary system with a symbolic presidency

He also said that the Government was expecting the Secretary-General`s report on 15 April and the continuation of Mrs Lute`s effort."

Asked whether the government had any doubts about Mrs Lute and her handling so far, the Spokesman replied: "No, of course. As the President of the Republic had said yesterday, he had a very good meeting and a productive conversation with Mrs. Lute. "

Asked to say how close or how far was the agreement on the terms of reference, the Spokesman said that the President of the Republic was making efforts in order to have references to all the parameters raised by the Secretary - General and to find a way to overcome the difficulties.

Replying to another question, Prodromou said that despite the fact that the Turkish side has rejected the parliamentary system, as well as some of the non-binding positions on Guterres framework, the President of the Republic continued to insist on showing a positive attitude, “because the Greek Cypriot side is the one who wants to see the end of the occupation with an agreement that can give a functioning state. "