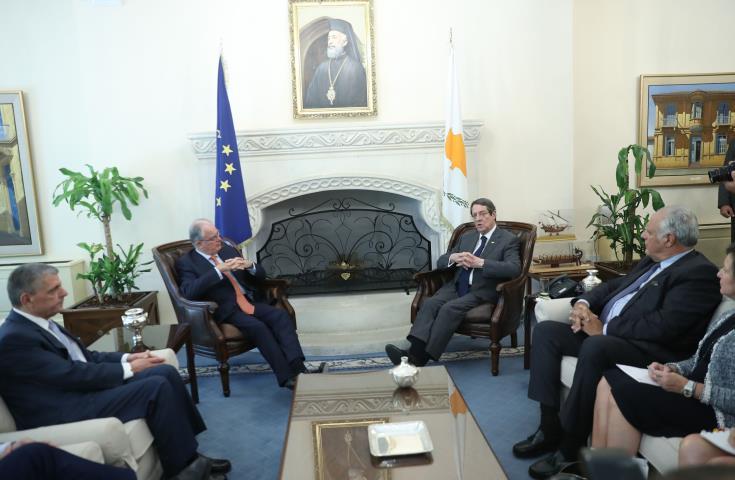 Hellenic Parliament President, Constantine Tassoulas, had on Thursday a meeting with President of the Republic of Cyprus Nicos Anastasiades, and pointed out that by enhancing their contacts the two countries strive to achieve the best possible outcome amid an unacceptably continuing and intensifying Turkish provocation.

Following the meeting, the President of the Hellenic Parliament told journalists that during the meeting he was responsibly briefed by the leader of the Republic of Cyprus on the latest developments regarding the national issue.

“I considered it my duty, as President of the Hellenic Parliament to reiterate the President of Cyprus that the Greek people, Greece, stand by Cyprus in the efforts to resolve the Cyprus issue”, he said.

He added that Greece’s support was not limited to words in order for the country to “pay off its debt verbally”, adding that it is rather a timeless and ever-increasing support which, despite the difficulties, the challenges, the injustice, “will ultimately, I believe, find Hellenism united and justified”

"The two governments of Greece and Cyprus, with the latest deepening of their contacts, are striving to achieve the best possible outcome, of course through an unacceptably continuing and intensifying Turkish provocation," Tassoulas concluded.