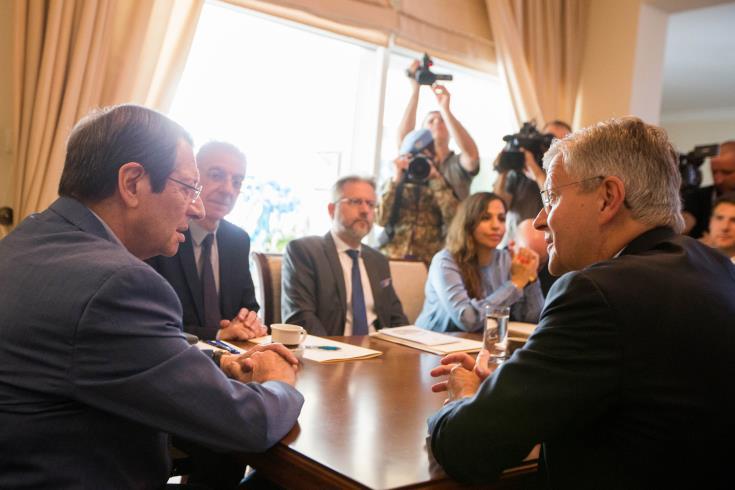 Cyprus President Nicos Anastasiades had the opportunity to raise the matter of Turkey’s provocations within Cyprus’ exclusive economic zone (EEZ) as well as his efforts for the resumption of reunification talks during a meeting with Jean-Pierre Lacroix, UN Under-Secretary-General for Peace Operations, Government Spokesman Prodromos Prodromou said on Wednesday.

UN Secretary General’s Special Representative in Cyprus and head of UNFICYP Elizabeth Spehar was also present during the meeting which took place in the President’s residence in Limassol.  Anastasiades has been recuperating from surgery after having fractured his right hip during a fall on June 29.

In statements after the meeting, Prodromou said that President Anastasiades “had the opportunity to brief the senior UN official about the continued tension caused by Turkey through its violations in the Cypriot EEZ.”

At the same time, he added,  he also briefed Lacroix about his efforts and the meeting that has been arranged with Turkish Cypriot leader Mustafa Akinci, “to freely and openly discuss the possibility of resumption of negotiations, which is our goal.”

The government spokesman continued noting that during the meeting, President Anastasiades and Lacroix discussed various matters to do with UNFICYP and that its “role and importance and its mandate in Cyprus” was underlined.  “It is encouraging that we have the UN’s full support for the continuation of UNFICYP’s mandate,” he added.

At the same time, Prodromou said, “it was an opportunity to also discuss confidence building measures between the two sides, the proposals put forward by the President for some months now, so that a better climate can be created, the appropriate one for the resumption of negotiations.”

He further pointed out that during such meetings “it is always underlined that Turkey’s violations and behaviour in recent times vis-à-vis the Republic of Cyprus constitute the main problem.”

Prodromou also recalled that so far Turkey has been unwilling to move forward and has created a series of obstacles to delay or cancel the negotiations from the point where they had ended in the Conference on Cyprus in Crans – Montana.

Cyprus President, he noted, makes every effort and had repeatedly put forward proposals in the past to Akinci for the two of them to meet, he had suggested that they meet in the presence of (Jane Holl) Lute (UNSG`s envoy), when he was in Beijing he had proposed that they meet in the presence of UN Secretary General himself if that would help and he had accepted and had himself proposed for an informal conference of all interested parties to take place.

All the various proposals made by President Anastasiades, he said, are due to the fact that “our aim is to reach the point of resumption of negotiations.”

The meeting between the two leaders on August 9 is a positive development and there is no need to comment further on it, he pointed out. He wished “that we are able to comment on positive outcomes from the meeting.”

Today, he added, the letter will be sent to political party leaders in Cyprus and the ambassadors of EU 27 member states, so that the positions of the Republic of Cyprus, a UN member state, with sovereign rights derived by the international community, international law and through its recognition may be known.

Something, he said the Turkish Cypriot side does not seem to take into account. He also recalled that in previous talks convergences had been achieved between the two sides on the natural gas, which had allowed for the negotiations to reach a very advanced stage without the matter raised further.

The Repblic Cyprus has been divided since 1974, when Turkish troops invaded and occupied 37% of its territory. Repeated rounds of UN-led peace talks have so far failed to yield results. The last round of negotiations, in the summer of 2017, at the Swiss resort of Crans-Montana ended inconclusively.

Turkey issued in May a navigational telex, announcing its intention to start drilling off Cyprus until September 3. Since May 4, the Turkish drill ship “Fatih” is anchored in an area that falls within the EEZ and continental shelf of the Republic of Cyprus.

A second Turkish drill ship, “Yavuz”, is also off the island’s northeastern coast.

The United Nations Peace Keeping Force in Cyprus (UNFICYP), comprising military and civilian personnel from various contributing countries, arrived in Cyprus in March 1964 after intercommunal fighting broke out. The mandate of the force is renewed every six months by the Security Council.