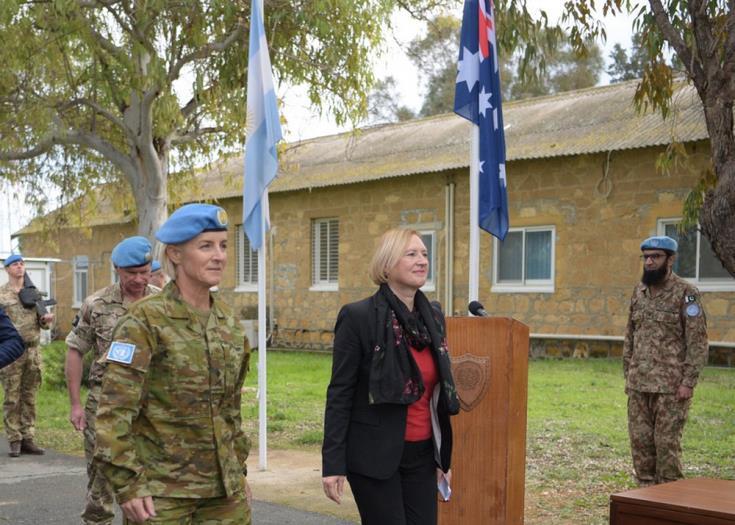 Speaking during a welcoming ceremony at the Mission’s headquarters, in the bufferzone, Spehar told Pearce that “all of us at UNFICYP are delighted to have you join our ranks.”

“You have a critical role to play in our efforts to achieve the benchmarks set by the Mission’s mandate. The peacekeepers under your command work every day to maintain the stability of the 180-kilometer long Buffer Zone through patrolling and liaison functions. This is vital for us in terms of the bigger picture—achieving sustainable peace in Cyprus,” she added.

Spehar said moreover that “this goal is as germane today as it was when this Mission started. It is a goal I know we all share - the dream of a united Cyprus.”

The Head of UNFICY also noted the sensitive political climate, in which peacekeepers conduct regular liaison with the two sides on the island.

Moreover, Spehar underlined the fact that “UNFICYP becomes the only UN peacekeeping operation in history to not only be led by a female Special Representative of the Secretary General, but to now also have female leadership in both uniformed components.”

“I hope your example will help encourage increasing numbers of women in senior UN peacekeeping roles,” she added.

The Australian flag was raised during the ceremony to welcome the new Force Commander, in the presence of Australian High Commissioner to Cyprus, Sam Beever, according to a tweet by UNFICYP.

Pearce also served as the Australian Army Headquarters Chief of Staff and, from 2010 to 2012, as Director of Special Operations Support. She was a military observer with the United Nations Mission of Support in East Timor in 2002 and served in Afghanistan in 2016 as part of NATO, among others.

“Increasing the numbers of women serving in peacekeeping is an important priority for the UN and with Major General Pearce’s appointment we are proud to lead the way,” UNFICYP Spokesperson Aleem Siddique told CNA,

He also noted that UNFICYP is one of the few peacekeeping missions led by a woman, Elizabeth Spehar, and has women in charge of both military and police components.

The Republic of Cyprus remains divided since the 1974 Turkish invasion of the island. Numerous UN-backed talks, aiming at reunifying the island under a federal roof, have failed to yield any results. The latest round of peace talks took place in July 2017 at the Swiss resort of Crans Montana but ended inconclusively.

The United Nations Peace Keeping Force in Cyprus (UNFICYP), comprising military and civilian personnel from various contributing countries, arrived in Cyprus in March 1964 after intercommunal fighting broke out. The mandate of the force is renewed every six months by the Security Council. The latest renewal was in July 2018, with the unanimous approval of resolution 2430.