Home » News » UN will arrange meeting between the two leaders

UN will arrange meeting between the two leaders 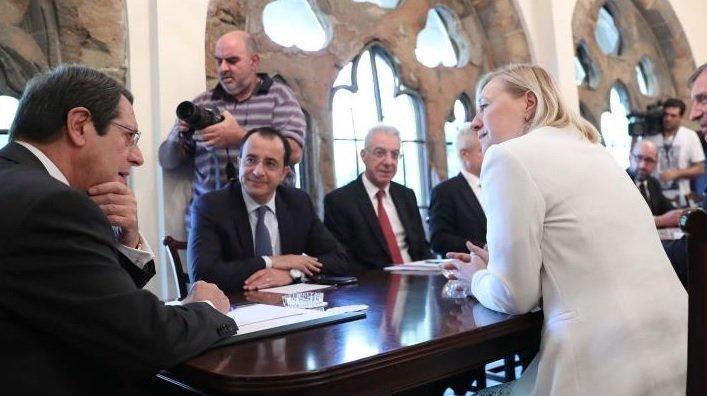 The United Nations will arrange a meeting between the two leaders, Cyprus President Nicos Anastasiades and Turkish Cypriot leader Mustafa Akinci, after President Anastasiades returns from Brussels where he will be next week to take part in an EU Summit.

President Anastasiades was replying to questions as he was departing from the Presidential Palace after having had received UN Secretary General’s Special Representative in Cyprus and head of UNFICYP Elizabeth Spehar.

“The message conveyed by Spehar is that Akinci views my proposal in a positive light and a meeting will be arranged through the United Nations in the coming days, in line with the schedule, since next week I will be in Brussels,” he said.

Therefore, President Anastasiades added, “immediately after my return a date will be determined for the meeting.”

Asked whether the meeting will have no agenda, he replied positively, clarifying that neither Akinci nor himself wish to give the impression that negotiations are resuming “unless a proper preparation takes place and we know what matters we will discuss.”

“As the leaders of the two communities, we will simply exchange thoughts and reflections on what the prospects are, what our future will be and how we can find the way at last in order for the solution we seek to be, as I have reiterated many times, functional, viable and offering prospects to the Cyprus people as a whole.”

Spehar, who departed a little earlier from the Presidential Palace just said that “it was a very good meeting.”

Cyprus has been divided since 1974, when Turkish troops invaded and occupied 37% of its territory. Repeated rounds of UN-led peace talks have so far failed to yield results. The latest round of negotiations, in July 2017, at the Swiss resort of Crans-Montana ended inconclusively.