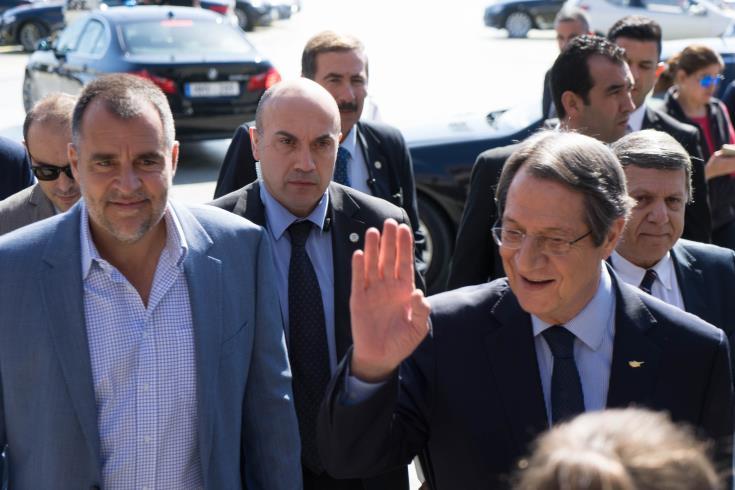 Efforts are underway by UNSG Envoy for Cyprus Jane Holl Lute that will create the conditions for the resumption of the Cyprus talks, the Government has said, however announcements will be made in due time.

President Nicos Anastasiades was asked on Friday if Lute has put forward any new ideas, and he replied that when something comes up, it will be announced at the appropriate time.

Moreover, Foreign Minister Nikos Christodoulides said that an effort is underway the past days and hours by Lute, of a procedural character and expressed the hope that this effort will create the conditions for the resumption of Cyprus talks.

President Anastasiades in his statements referred to the proposals of the Greek Cypriot side on parliamentary democracy and decentralization of power, describing them as efforts to break the impasse and lead to the resumption of talks for a viable solution without occupying forces and guarantees.

He added that these proposals prove that our side is ready with alternative ways in order to achieve the resumption of talks, pointing out that they do not diminish the rights of Turkish Cypriots.

Commenting on criticism on his handlings, he recalled that the first time that the issue of guarantor powers was discussed, was in January of 2014 when the then Prime Minister of the UK David Cameron had said that his country would not be interested to maintain the role of the guarantor, given that this would be something that both communities would agree on. The President also referred to the six-point framework by the UNSG.

He furthermore said that efforts were made on his behalf for a joint meeting with the Turkish Cypriot leader Mustafa Akinci and Jane Hall Lute but the T/c leader was not positive.

Lute, who has visited the island several times, was here again last Sunday and had separate meetings with the leaders.

Cyprus has been divided since 1974 when Turkey invaded and occupied its northern third. Negotiations under the UN aegis aim at reuniting the island under a federal roof. The latest round took place in the summer of 2017 at the Swiss resort of Crans Montana but failed to yield any results.